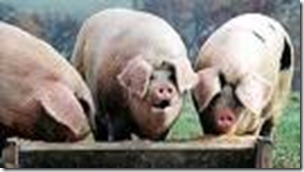 I really can’t believe that our politicians are so out of touch with what the average commuter has to put up with, and come up with this.

We’re buggered if we are going to be inconvenienced by the Olympics.

Those poor MPs are going to take extra holiday because they are going to be put out by the road/rail chaos that will ensue during their puff piece that I for one never had a say in.

I mean , really, how many private companies would stay in business if every worker was allowed to take time off to see his/her (I must be PC here) entertainment of choice.

And the Nub is here.

Parliament will rise on July 13 to avoid the tight road restrictions being put in place for the Games.

So what. The public that pays their wages can’t just pick and choose to down tools when the local roadworks inconveniences them. Definitely a case of we are above you plebs.  They really haven’t a clue of how they are held in so much contempt.

Some comments on the article.

Why don't they shut down for their summer break and never come back? Parliament is an outmoded and useless institution that costs the taxpayer an obscene amount of money. Why do we need these parasites?
- Joe Blow, Wales, 31/05/2011 13:37

They obviously need the extended holiday so they can stick their snouts in the Olympic trough and not have to worry about getting back to 'work'
- Johnny Reggae, south east, 31/05/2011 12:42

What a joke!
They take 2-3 weeks at Easter, 6-7 weeks in the summer and 2-3 weeks at Christmas along with all school half-term holidays. This totals some 3-4 months holiday breaks per year. Maybe we should put them all in school uniform, pay them £30 per week and send them off with a packed lunch on the bus with their free pass.
The job does not end because it's a weekend, holiday or some form of anti-social timing. Get on with the job and start sorting out UK's mess. You could begin by scrapping your gold-plated pensions, reducing your holidays to maximum of 5 weeks per year and it would make a very pleasaant change for MP's to be affected by their decisions.
- Guy, Croydon, 31/05/2011 11:49

Signs of the future

If the country travels much further down this road of oppression, the sign below will likely become the norm. 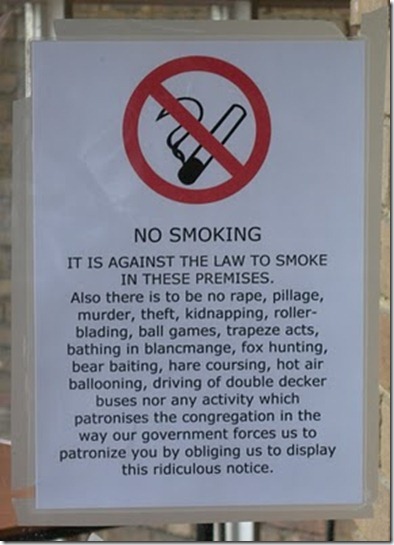 The trouble with modern Britain is that so many laws have been passed in the last decade, no-one knows what is permissible and what is not. Where is the repeal bill promised to us after the election? That little stunt seems to have faded away into obscurity.

It’s the slow change from “innocent till proved guilty”, to “guilty until you damn well prove yourself innocent” which has overturned the fairness in our relation with the state apparatus. Parking fines, speeding in front of a camera, etc.

Oh and of course don’t swear at this article.

I’d like the Britain I used to know, back again.

Posted by The Filthy Engineer at 19:11 5 comments:

Email ThisBlogThis!Share to TwitterShare to FacebookShare to Pinterest
Labels: anti smokers, Slash my wrists, The law, The past

A complaint from the Sunlight Centre for Open Politics has triggered an Electoral Commission case review into Chris Huhne's election spending.
They state:
"Our assessment of the information indicated that there may be the possibility of an offence under Representation of the People Act 1983."

Their case review will report by August 24th.
--Ends--

Email ThisBlogThis!Share to TwitterShare to FacebookShare to Pinterest
Labels: huhne

The consequences of getting old

Recently, I was diagnosed with A.A.A.D.D - Age Activated Attention Deficit Disorder.
This is how it manifests itself:
I decide to water my garden.
As I turn on the hose in the driveway,   I look over at my car and decide it needs washing.
As I head towards the garage, I notice mail on the hall table that I received from the post man earlier.
I decide to go through the mail before I wash the car.
I lay my car keys on the table, put the junk mail in the recycling box under the table, and notice that the recycling box is full.
So, I decide to put the bills back on the table and take out the recycling first.
But then I think, since I'm going to be near the letterbox when I take out the recycling paper anyway, I may as well pay the bills first.
I take my cheque book off the table, And notice that there is only one cheque left.
My extra cheques are in my desk in the study, so I go inside the house to my desk where I find the cup of coffee I'd been drinking.
I'm going to look for my cheques, but first I need to push the coffee aside so that I don't accidentally knock it over.
The coffee is getting cold, and I decide to make another cup.
As I head toward the kitchen with the cold coffee, a vase of flowers on the worktop catches my eye - the flowers need water.
I put the coffee on the worktop and discover my reading glasses that I've been searching for all morning.
I decide I better put them back on my desk, but first I'm going to water the flowers.
I put the glasses back down on the worktop, fill a container with water and suddenly spot the TV remote control. Someone left it on the kitchen table.
I realise that tonight when we go to watch TV, I'll be looking for the remote, but I won't remember that it's on the kitchen table, so I decide to put it back where it belongs, but first I'll water the flowers.
I pour some water in the flowers, but quite a bit of it spills on the floor.
So, I put the remote back on the table, get some towels and wipe up the spill.
Then, I head down the hall trying to remember what I was planning to do.
At the end of the day:
The car isn't washed
The bills aren't paid
There is a cold cup of coffee sitting on the counter
The flowers don't have enough water,
There is still only 1 cheque in my cheque book,
I can't find the remote,
I can't find my glasses,
And I don't remember what I did with the car keys.
Then, when I try to figure out why nothing got done today, I'm really baffled because I know I was busy all damn day, and I'm really tired.
I realise this is a serious problem, and I'll try to get some help for it, but first I'll check my e-mail....

Posted by The Filthy Engineer at 11:53 5 comments:

Email ThisBlogThis!Share to TwitterShare to FacebookShare to Pinterest
Labels: OLD

Maybe not dead yet but certainly a possibility.

There’s some pretty big players in the game that are becoming sceptical in this new age of austerity. The USA, Japan, Canada, & Russia are all starting to rail back from the biggest con trick of the last fifty years.

The governments from all three countries opposed a new round of binding GHG cuts even before climate change negotiators from nearly 190 countries arrived in the Thai capital for the current round of talks.

The MSM seem to have kept very quiet about that.

Meanwhile in the UK our Climate change Buffoon is pushing on ahead regardless.