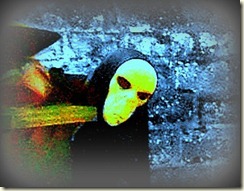 I’m not sure whether I contracted Dementia, just plain forgetful, or there are demonic forces at play at FE towers.

Now Mrs FE always puts one of the wheelie bins (Green one this week) out on a Monday morning before she sets out for her sixteen hour shift down the porridge mines. (We need the money to keep me in drink, fags and truffles, you see).

After arising from my bed at the early hour of  eleven AM and consuming a leisurely breakfast of strong coffee I went out in the spirit of marital harmony to retrieve the bin from the end of the drive.

NO BIN. First thought was that an international gang of bin nappers was operating in the area. Second thought was whether to call the police and ask if they have an armed bin recovery squad available. Third thought was time for a fag. Of course the ciggie packet, only having one it, had to be disposed of, so round the corner of the house to deposit it in the black bin.

Bugger me. There was the Green bin nestling up against the Black bin. How did it get there? Have we got a bin moving charitable organisation set up in my neighbourhood all of a sudden, Fairies, or maybe I’ve become senile and should be put out of my misery with a non Halal stun gun? What do you think?