Pink Pussy reunited with her owner.

I’m not sure about the owner bit. I’m of the firm belief that our two cats think they own us.

The owner of the pink pussy in the news has given herself up to the RSPCA.

Kill her you say for brutally harming this poor defenceless animal.

The owner of a pink cat who was tracked down after a nationwide hunt has admitted she dyed her pet to match her hair.

Defiant Natasha Gregory said she was proud of her actions - and would even do it again. 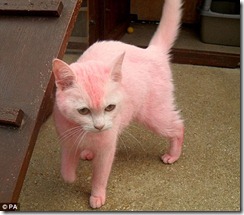 The fluorescent feline, named Oi! Kitty, is now so bright that she glows in the dark.

It would also seem in this case, that even the RSPCA maybe seeing sense over this owner and her actions.

'I have contacted the RSPCA to get her back and the lady I spoke to said she didn't think it would be a problem. But I'm going to have to wait until they go back to work today.'

I’m not sure about the vet though.

Despite being branded cruel by vet Penny Gillespie, who has been caring for the cat since she was found in a back garden,

And a self beclaimed animal behavioural expert.

Claire Guest, an animal behavioural expert, warned of the danger of colouring animals.

'My feeling would be that if she was a very bright colour other animals might react to her differently because anything based on red is an alarm colour in nature,' she said.

If my experience of cats counts for anything. Any creature threatening a cat is in for a nasty shock.

Lets just wait though to see if the RSPCA are good to their word.

Posted by The Filthy Engineer at 19:50 6 comments:

A classic case of redundant design, this motorway actually goes nowhere. It is in some respects verification of Einstein's Theory of General Relativity in that, if you drive along it for long enough, you return to your starting point.

It was designed to divert traffic from driving across London and lorries were banned in the metropolis during the day in an attempt to move them onto this road. This was a brilliant plan apart from one small but significant flaw - there wasn't enough room for the traffic that wanted to use it.

Add to this the activities of the Cone Fairy and the recipe for disaster was complete. However, some planner who is obviously some kind of lateral genius or an abuser of mind-altering substances came up with the idea of lowering the speed limit in order to increase the speed of traffic.

Against all logic, this worked.

There are those who say that, when looked at from above, the shape of the M25 is a demonic sigil. This of course is completely wrong - Satan's just not that clever.