I gave you Trolling for Beginners a while back so I thought it was time for the more advanced session.

If you've forgotten the basics then please go and read up. You may have a test at the end. 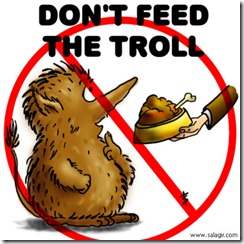 Phew! There is no moderate trolling section! That's because your path to Internet infamy is as easy as feeding a kitten to a rottweiler. From here on in it's advanced trolling all the way – but don't worry. You still don't need any thought, intelligence or consideration to win the attention that you so richly deserve. Just that Internet connection.

Hopefully by now you'll have found a forum that's populated by people who on the outside seem sane, welcoming and forgiving. Don't be fooled! You'll be able to get some attention here, and the challenge will make it all seem worthwhile. Pick yourself a username and get ready to post. Don't rush in with threats of kitten murder straight away though, you'll need to integrate yourself into the community. Ignore your egotistical urges, and attempt to be sane and reasonable. Make notes of anything that the community seem to agree on – especially with regards to politics or religion. Then, after a month or so, it's time to reveal yourself.

Fire up a new thread, with an intriguing question for a title – something like Can there be world peace without building an altar to the Kitten-Eating Rottweiler Dog? You now have to argue vehemently that unbridled worship of a fearsome canine figure is key to solving any and all problems in the world. Don't worry about paltry facts, evidence or punctuation – just post the same statements over and over again. By now, those sane and welcoming people will be so riled up that you should have dozens, if not hundreds of replies.

Now's the time to step it up a gear. Rinse and repeat with a similar thread – something like Get Ready, the Kitten-Eating Rottweiler Dog is coming! Again, echo the same unwavering beliefs that your baseless, factless, tactless argument is the most important thing in the universe. Repeat this over three or four more threads and you'll have accrued thousands of responses, and those sane and welcoming people will be hurling vitriol at their screens.

Well done – you are now a fully-fledged Internet troll, and you've managed to ruin the days of a handful of complete strangers. Even more importantly, you're now infamous!

Now dust yourself off, go outside, make some friends and do something constructive with your life.

1 Please note: If your dictionary search results in an obscure word such as 'parvanimity', you should probably pick a new one. And learn to appreciate irony.

The Police State is most definitely here.

It would seem that the Police don't even know the laws that they are supposed to uphold. It is still not illegal to film in a public place, so why are they still trying to stop it?

The video below is of the Police and a PCSO harassing The "Love Police" outside Harrods.

The Oxford Mail has the story of the police using section 43 of the Terrorism act to stop and search an ex RAF engineer from photographing them. Oh and there's a short vid to go with the story.

This should be stopped in it's tracks right now. Wanker of the week is PC Steve Burchett

Posted by The Filthy Engineer at 15:24 No comments:

A good article from over the pond on the failure of CCTV to make us anymore safer. In fact it goes on to propound that in fact they make us less safe.

Although it's comforting to imagine vigilant police monitoring every camera, the truth is very different, for a variety of reasons: technological limitations of cameras, organizational limitations of police and the adaptive abilities of criminals. No one looks at most CCTV footage until well after a crime is committed. And when the police do look at the recordings, it's very common for them to be unable to identify suspects. Criminals don't often stare helpfully at the lens and -- unlike the Dubai assassins -- tend to wear sunglasses and hats. Cameras break far too often.

In London the figures for crime solved by CCTV is 1 in every 1,000 cameras. Not a very good success rate I would have thought. And those cameras cost the taxpayer £200 million.

And although a police officer on the street can respond to a crime in progress, someone watching a CCTV screen can only dispatch an officer to arrive much later. By their very nature, cameras result in underused and misallocated police resources.

I think that the £200 million would have been better spent on recruiting a few more Plods.

Full article over on CNN.