Mrs Thatcher could do it, so why can't Gordon Brown? 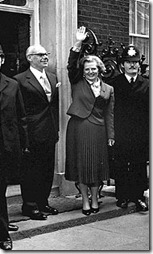 Mrs T realised that she had to save money by pruning the non-productive sector. So she did so ruthlessly as soon as she became Prime Minister.

One of her first moves on taking office in May was to start cutting Civil Service jobs. The Government machine needed cutting by at least 5 per cent, she insisted, but ideally closer to 20 per cent.

And she certainly was not to be turned by anyone.

Any minister who tried to block her was given short shrift. “This paper is much too sketchy and cannot possibly be included,” she wrote on a draft paper in which Christopher Soames, the Lord President of the Council, suggested that the mass redundancies planned by the Prime Minister were less than prudent. “What are we doing with 566,000 that can’t be done with 500,000?”

I wonder how she would treat the EU nowadays if she had only known what an Edifice of corruption and power it would become. Maybe she would have remembered this affair :

Mrs Thatcher’s forthright, if pragmatic, style was also evident in her dealings with Rhodesia after the April 1979 election, which resulted in a power-sharing arrangement that involved neither of the main nationalist parties. When it was suggested that Lord Harlech, emissary to Rhodesia, should meet the Patriotic Front there, she scribbled: “No! Please do not meet with the ‘Patriotic Front’. I have never done business with terrorists until they become prime ministers.”

Thankyou to The Times

Posted by The Filthy Engineer at 19:36 No comments:

Just by changing your name from Webeurope is not going to get you off the hook so lightly.

You're still in the frame as Easycms

PS Your Website design is still crap and you Mr Karl Winn, are still a cunt.

He must have seen it? Surely?

When you get crap like this it makes your blood boil.

Karl Winn of Taunton, 60, is the boss of a net design company named Webeurope and he employs 16 people. He was contacted by Forces Recruitment Services who asked if he would consider taking on ex-soldiers. His response was:

Personally, I'd rather recruit ex-drug dealers, convicts and even child molesters rather than consider anybody who has been in the pay of the British Government.'

'Anybody who has been in the pay of such a military force, and by their silence and complicity has condoned such illegal and immoral actions while accepting a monthly bloodstained pay-packet , certainly won't be considered for employment by us.'

'The reality for the families of their victims is that there will never be any justice, and there never will be any closure, for the loss of a son, a husband, a child, or a family member who has fallen victim to British Military personnel who are going beyond 'just doing their job'.

'Please remove us from your email list. Regards, Karl.'

What a nice man.

UPDATE: Solution is to change the name

Source
Posted by The Filthy Engineer at 10:39 9 comments: