Those words I hated………

on joining a ship. “You’re in charge of the Fire and repair party”.

Now the fire and repair party (FRP) usually consists of twenty or more men or women of a variety of specialisations. Deck, engineering, catering, electrical, etc.

Of course I’m in charge of this motley cru (sic) and have to work out who is going to do what.

I have a junior officer as my number two and general dogsbody.

There is usually an officer from the catering department who is delegated to maintain the incident board, marking up on the wall mounted plans of the ship, the incidents as they occur. The incidents can range from fire and flood, to chemical hazards or radioactive contamination. (I don’t like the last two. They usually mean that I’m going to die a nasty death).

Fire is the most likely  scenario. Naturally a thousand miles from land and  dialling 999 does not get a response from the fire brigade. Ergo, we must fight fires ourselves.

To that end I have to form two five man firefighting teams. The problem is that all I have is a list of names. So I pencil in the names of the people against the duties that they will do. Simples.

Before I go on, I’ll just give you a run down on a five man team. All five are to be dressed in full fire protective suits and Breathing apparatus. each member will have a specific duty.

No.1 is the water wall number whose job is to be slightly in front, operating his hose in a circular spray to protect the team from the heat and flames.

No’2 is the fire-fighter who has his hose in ragged spray mode to actually fight the fire.

No.3 is the team commander who is slightly behind the front two and is surveying the situation with his thermal imaging camera (TIC).

No’4 is the hose handler.

No.5 is the ship protector who’s job is to seal the doorway to protect the ship to prevent the spread of fire into the rest of the ship.

Now comes the crunch. I’ve put names to the duties so everything is fine. NOT.

No’1 is a gay steward (Lovely chap) who suffers from claustrophobia.

No.2 is a female who is 5’ 2, who when turning on her hose is instantly bowled over backwards by the force.

No3, the team leader is afflicted with a stutter and is unable to communicate with the rest of the team over the radio.

No.4 is morbidly obese and struggles to carry his own wait let alone two fully charges hoses.

No.5 is no problem. Anyone can sit in a doorway watching the rainbows glistening off his water wall..

These are the problems when you have names and not faces. It doesn’t help that you usually have half a dozen of the FRP who make any excuse as to why they they should be exempt from a particular duty. “I’ve got gout, a rash, don’t know how to use the BA (Rubbish. You have to have done the course to even be there)”. Of course they don’t have a leg to stand on when I state that they wouldn’t be there without their yearly medical check up being passed.

This is a bit of a moan. However it is satisfying when it works. For some reason the majority of fires I’ve had to contend with have been at night. In every instance I’ve been amazed at the speed my teams have mustered, dressed and put the fires out.

Just goes to show, that with a little planning the system works.

The best fire-fighter I’ve ever had was actually a 5’ 3 inch, female cook, shaped like a beach ball, with a tenacity that was second to none. I would have made her team leader. However she couldn’t see over the two firefighters in front of her.

The only good thing about these drills is they are usually held towards the end of the working day. The upside is that TFE can rush off, have a shower, and get into the bar early.

Every story has a happy ending.

Posted by The Filthy Engineer at 20:19 3 comments:

In praise of beer. 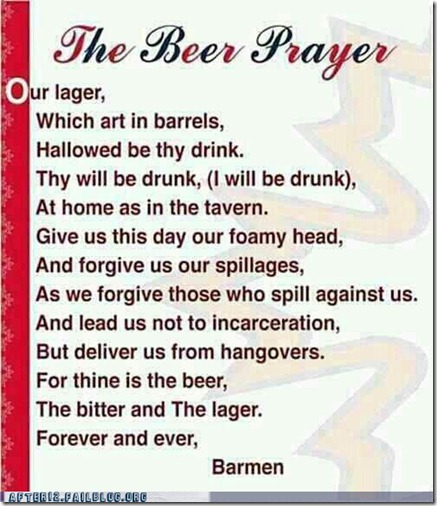 Posted by The Filthy Engineer at 06:47 No comments: