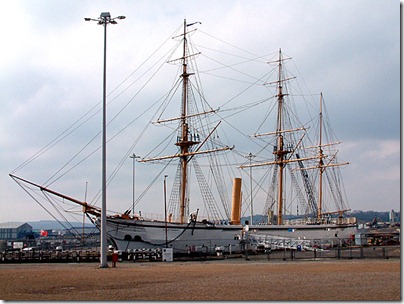 Now you all thought that my first ship was RFA Retainer. Well you were all wrong.

My first ship was HMS Gannet or as it was in my day, the Training ship Mercury. Now it didn’t look like the pic above in my day. The masts had gone, no funnel, and the upper deck was covered by a corrugated tin roof.

HMS Gannet is therefore a classic example of the type of ship used to implement Great Britain's 'gunboat diplomacy' during the final 25 years of the nineteenth century. As fast if not faster than their sailing predecessors, sloops such as HMS Gannet maintained a capability as sea boats that ensured they could be kept at sea when larger ships had been forced to take refuge. In addition, her composite construction was ideal for her role allowing her to operate at sea for long periods and over long distances without the need for elaborate dockyard facilities to maintain her as her carpenter and crew could repair most minor damage while at sea. Indeed Gannet's designer, Sir Nathaniel Barnaby, was so confident in her hull design that he ordered that when ships of her type returned from duties overseas, they were only to have obvious work done, and were not to be stripped down completely, as was the general practice at the time.

In my day, the school day consisted of being turfed out of your hammock at six in the morning, whereupon the first order of the day was to generally clean up the ship. Scrubbing the decks was the chore of choice. Cleaning the toilets was not.

This was followed by rowing ashore in 36 foot cutters to the shore establishment, followed by the inevitable cold shower and a meagre breakfast. (Monday: Porridge, slice of bread, and an egg. Tuesday: Porridge, slice of bread, and a rasher of bacon. Wednesday: Same as Monday. Need I continue?). On completion it was tidying up up the shore establishment such as sweeping the parade ground and the like. (Have I mentioned toilets?).

Just to make sure we were all there we next had to form up on the parade ground in our divisions (Mine was called the poncy name of Rodney. Apparently he was a famous Admiral).The roll call didn’t always tally. During the winter of ‘62, 14  of our number escaped one night and made a break to freedom. Bearing in mind that the river Hamble in which were ensconced had frozen over, and that the ice was forming on the internal decks, I just wonder why I didn’t do the same. Mind you, my suggestion of tunnelling out was not very popular.

Then of course there were classes to attend. In addition to the usual, we learnt Navigation, Seamanship, and signals. (incidentally I hold O level passes in Navigation and Seamanship. Bye the way did I ever mention that my chosen profession was marine engineering).

Of course all things had to end. We had to row out to that bloody prison hulk again, in the evening.

Three years in prison. To be topical, Rapists have never had it so good.

The long and short of it was I left, and was enthusiastically grudgingly accepted as an engineering cadet in the Royal Fleet Auxiliary.

Why was the Training Ship Mercury set up?

Charles Hoare founded the school to rescue boys from unpromising environments and train them primarily for service in the Royal Navy. The first boys were said to be:
"improved street arabs of fourteen or fifteen years of age who have vouched for themselves that they are willing to enter the Royal Navy" picked up from the slums of London and quarantined at a cottage in Tooting before being sent to the ship."

The trials and tribulations of growing up with whores, booze, transvestites will soon be coming to a blog near you in the near future.

It’s the look on the girl’s face as it slowly dawns that it’s about her.