If you’re one of the professionally offended, look away now.

And before you harp about the watershed. There is no watershed on this blog.

The teacher say's; Ok class,  I'd like you to tell me what you really need at home.

The teacher say's; Yes, that would be useful.

The teacher say's; Yes, that would be useful too.

The teacher say's; Oh, come on. Everybody needs something.

Little Johnny say's; No. My Sister came home with a Muslim yesterday,and my Dad said;

Drink and be Merry.

Well, actually No. The Government thinks all you lot drink to much. *FE takes a slurp of his single malt*

Supermarkets and shops will be banned from selling drinks for less than any duty and VAT owned on them under proposals announced by the Home Office.

The move means a can of lager could still be sold for 38p and a litre of cider for just 40p.

Of course this will save thousands of avoidable deaths I here you cry.

Again, Actually no it won’t.

Petra Meier, professor of public health at Sheffield University, who carried out research on issue for the previous government, said the move would have little impact on consumption and drinking habits were unlikely to change.

She estimated it would result in saving 21 lives a year.

Alright I’ll come clean and admit I did miss a bit out here.

In contrast a blanket minimum price of 50p per unit of alcohol would prevent 3,000 deaths a year

But then again this is the same tactics employed by the likes of Alcohol Concern and ASH. Just cherry pick some of the data and bury the rest.

Posted by The Filthy Engineer at 19:19 3 comments: 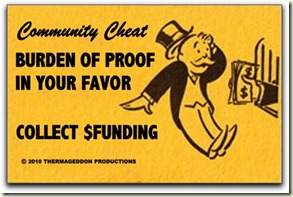 Over there he challenges Dr Kevin Trenberth over trying to changes the rules of the game.

Posted by The Filthy Engineer at 14:24 No comments: