This man may have his fingers crushed in the quickly closing till. 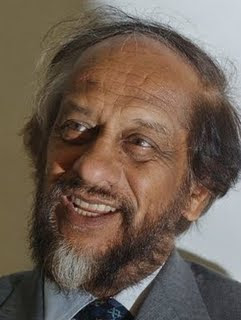 I wrote about this man previously. He is the Chairman of the IPCC. In that article I wrote about the financial Interests he had outside the IPCC. Over at Eureferendum they give a really good breakdown of all those supporters of AGW who contribute to his Washington operation Teri

It really makes your head spin when you see who is backing him, even though as Chairman, he is supposed to be impartial.

Anyway to cut a long story short, Lord Monkton and Senator Fielding have written an open letter to him asking him to explain why in his address at Copenhagen conference, he made so many blatant false statements, biasing the audience towards AGW.

The last section of the letter is reproduced below. I would imagine he will be in deep shit.

Given this and other mistakes that an international body of this nature ought not to have made, and given your numerous and direct conflicts of interest that have, in our opinion, been insufficiently disclosed, we are also copying this letter to the delegations of the states parties to the UN Framework Convention on Climate Change with a request that you be stripped of office forthwith.

The letter is here in Adobe Format.
Posted by The Filthy Engineer at 15:35 No comments:

Email ThisBlogThis!Share to TwitterShare to FacebookShare to Pinterest
Labels: AGW

It would appear that the Russians are accusing the Climate scientists of mishandling data.

Climategate has already affected Russia. On Tuesday, the Moscow-based Institute of Economic Analysis (IEA) issued a report claiming that the Hadley Center for Climate Change based at the headquarters of the British Meteorological Office in Exeter (Devon, England) had probably tampered with Russian-climate data.

It would now appear if these facts are true, that the Hadley centre, (The British Met Office) has only used partial data, ie the bits that fit the warming scenario.

Analysts say Russian meteorological stations cover most of the country's territory, and that the Hadley Center had used data submitted by only 25% of such stations in its reports.

Read further at Rianovosti or at the article written by James Delingpole
Posted by The Filthy Engineer at 09:09 No comments: