Because there are no mosques in Venice, The Government has allowed the Italian Muslims to pray in the streets for O.B.L

So far 543 have already drowned 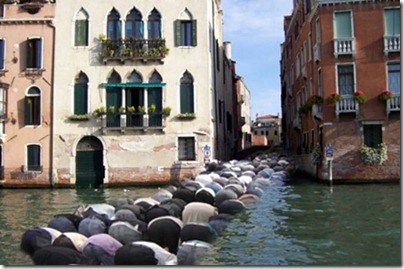 I’m expecting a knock on the door by an AK47 wielding terrorist any moment soon.

Posted by The Filthy Engineer at 20:05 3 comments:

Email ThisBlogThis!Share to TwitterShare to FacebookShare to Pinterest
Labels: Fatwa

If you’re flying anywhere soon there’s a very useful website called FlightRadar24, which will not only allow you to track aircraft, but will also show you a forecast of the latest volcanic ash cloud.

At the moment the Ash cloud is south of Leeds.

This is a public service broadcast from FE towers.

Posted by The Filthy Engineer at 14:03 2 comments:

You what! Oh not again.

California preacher Harold Camping has said his prophecy that the world would end was off by five months because Judgment Day will actually come on October 21.

I must say I feel a little pity for those who were stupid enough to believe in this crackpot. Homes have been sold, children removed from school, pets given away, & possessions sold off.

On second thoughts No I don’t. Anyone who slavishly follows a religion to that extent, are the makers of their own downfall. And that includes those who worship the great Gods of Wind and Solar. If you want that sort of power, don’t expect me to subsidise it for you.

Posted by The Filthy Engineer at 10:13 8 comments:

Email ThisBlogThis!Share to TwitterShare to FacebookShare to Pinterest
Labels: end of the world again

Posted by The Filthy Engineer at 09:20 No comments: