It's cool to smoke now

Is it really have the reverse effect? The smoking ban.

You tell me.
Posted by The Filthy Engineer at 16:17 No comments:

I see the French have got the balls to make it a criminal offence to wear the veil in public. With all this Hooha about terrorist threats to the UK, how can it make sense to allow people to have their face hidden?

Women who wear Islamic veils in public in France face a £700 fine under strict new laws being proposed.

The amount could be doubled for Muslim men who force female members of their family to cover their faces.

Jean-Francois Cope, president of Nicolas Sarkozy’s ruling UMP Party, said the legislation was intended to protect the ‘dignity’ and ‘security’ of women.

A woman wears a burka in Roncin, northern France. The proposed legislation to ban the veil in public would protect the 'dignity' of women

He is set to file the draft law in the National Assembly after Mr Sarkozy said veils were ‘not welcome’ because they intimidated non-Muslims.

‘We want a ban in public areas,’ said Mr Cope, making it clear the veil would not be allowed in public buildings, or on the streets of France, home to five million Muslims.

After all, many shops won't allow hoodies. 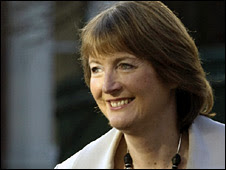 Harriet Harman has been fined for driving with undue care and attention. But why did the CPS drop the other two charges of using her mobile phone and leaving the scene of an accident? Could be the wiff of Keir Starmer be smelt here?

Anyway the Biassed BBC report is here for you to read if wish.
Posted by The Filthy Engineer at 11:58 2 comments: