A few days ago I posted up a poll trying to gauge the response to smoking rooms in public houses. Below is produced the results as of last night. Now ASH (Action on Smoking and Health) would have you believe the opposite. When the smoking ban was introduced in 2007 they gaily came out with the statistic that 80% favoured this draconian law. My simple poll would beg to disagree. 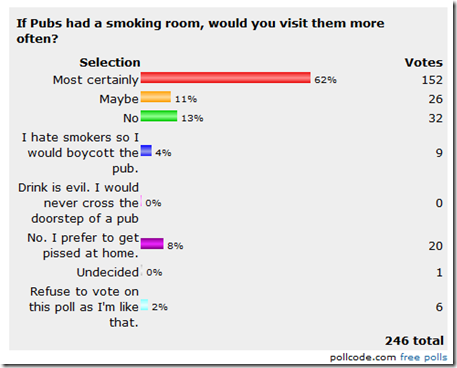 My stats show that almost the exact opposite is the prevailing view. When you add “Most certainly”, “Maybe”, and “No I prefer to get pissed at home”, you arrive at a figure of 81%. The “No”, and “I hate smokers so I would boycott the pub”, just muster 17%.

Governments seem to have the prevailing view that they know best. I say bollocks to that. It’s my life and I’ll do what I want with it. I refuse to be a statist clone that religiously eats his “five a day”, eschews alcohol, and cycles everywhere to save the world from “Global warming” or whatever the new mantra is now. (FFS, don’t get me started on cyclists on a Sunday morning in rural Kent).

Incidentally I came across the best smoking shelter situated on the Kent coastline this weekend. Most of the time it was eighty percent enclosed, but with the provision that the windows could be ejected within seconds. Mind you I doubt whether the smoking inspector would have lived after being tossed off the white cliffs even if he had objected.

If I had my way, and was in Government I would stop the government funding of Neo Puritan organisations such as ASH and Alcohol Concern, and tell them to take a running jump.