No, just use them as pawns to justify your ends. Oh, and do get them to coerce their parents while they're about it.

Have a read here if you are new to being a skeptic.

Posted by The Filthy Engineer at 20:36 2 comments: 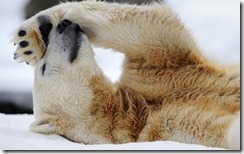 This sceptic only wishes that was the case.

Professor Bob Watson, the chief scientific adviser to the Department for Environment, Food and Rural Affairs (Defra) and former chairman of the IPCC, said yesterday that the backlash is the result of a campaign: "It does appear that there's a concerted effort by a number of sceptics to undermine the credibility of the evidence behind human-induced climate change." He added: "I am sure there are some sceptics who may well be funded by the private sector to try to cast uncertainty."

I've been skeptical of the Science of climate change for some considerable time now, but only entered the Blogosphere a short while ago. It was a relief to me to see that I was not alone in questioning the Science and spin about Climate change.

In the seventies we were bombarded by propaganda informing us that we were entering a new Ice age. Where is it?

In the eighties and nineties we were assured that we were all going to burn in hell due to AGW.

Now although AGW is still touted incessantly, the title has subtly changed to "Climate change". Could it be that these eminent scientists, the Politicians, NGO's, and the industries who stand to profit from this, are desperate to keep it alive at all costs?

Come on Shell, BP, Exxon Mobile and all you others. Where's my bloody money?

Posted by The Filthy Engineer at 19:57 4 comments:

Publish or be Damned

Posted by The Filthy Engineer at 10:25 No comments:

A memo to the "Warmists".

I liked this. Very indicitive about the way I feel about the Cult of global warming.

Please. Stop. You’re embarrassing yourselves. Take a deep breath, and try to understand what has happened to you during the past month. You need to accept that your dreams of global domination are over. Increasingly shrill attempts to terrify the masses into ignoring Climagate are only making you look foolish. The con job you’ve been running for the last thirty years is busted forever.

Read the rest over at Hot air.

Posted by The Filthy Engineer at 09:57 No comments: