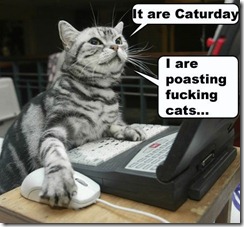 I've been using Thunderbird for sometime after my windows live mail decided to delete itself from my computer.

Now Thunderbird has decided that my wife's identity is too much for it. Why? I don't know.

The long and short of it was,I downloaded another free Email client (or two).

All was fine but trying to find a way of importing my Thunderbird address book into the new programme really was a challenge.

the new client seemingly has never heard of thunderbird so I had to play jigery pokery using Thunderbird, Googlemail, Gmail,( Yes I know that googlemail and Gmail are in theory the same but the new client would only recognise files from a Gmail account). And as for CSV's files that either one recognised but not another, don't get me started.

In the end I managed to import the address book.

GCHQ. Have you a place for a senior citizen cyber surfer?

P.S. Interestingly, my wife who works as a business analyst, with a multi-million pound computer programming company is baffled in to how I managed it.

Posted by The Filthy Engineer at 21:18 No comments:

Who wants tickets to Glastonbury?

The festival is sold up at the minute.

However. You could win one if you really want.

Quiz to win a ticket or six

It's a facebook quiz with five rounds. All different.

Posted by The Filthy Engineer at 13:53 No comments: