We are so screwed.

Well we are if you believe in this article:

We've built a flying saucer, boasts Iran (even if it does look like it belongs in a 1950s B-movie)

The hardline Fars news agency illustrated its story with a photo of a flying saucer, akin to one appearing in a 1950s Hollywood B-movie, hovering over an unidentified wooded landscape.

The reports gave no indication of the spaceship’s size. But they indicated it was small by claiming, somewhat bizarrely, that it can also fly indoors.

Of course 4 years ago they tried to tell us that they had stealth technology. However probably not.

American naval forces in the Persian Gulf have yet to come across a 'super-modern' radar-evading flying boat Iran claimed to have tested four years ago.

Here’s a pic if you don’t want to be bothered to follow the link. I wouldn’t. 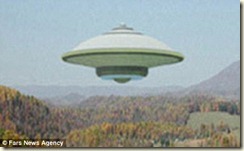 Posted by The Filthy Engineer at 19:23 2 comments:

Blogging maybe light. I’ve just come back from some major dentistry and the painkillers are wearing off.

Posted by The Filthy Engineer at 15:01 5 comments: