It might be a very good eye if the three major parties took some time out to woo a proportion of the populace that they seem to ignore.

With another General Election looming, it’s the over 50s who have the real voting power. We are the most politically engaged of all age groups and are the majority of voters in elections. We already control 80% of disposable wealth in the UK and will constitute 50% of the population by the year 2020.

It’s time for us to step forward… the 50+ generation, the age group that Government and big business forgot… now is your chance to engage in our Silversurfers General Election 2015 debate!

Below is a screenshot of voting intentions of the over fifties. 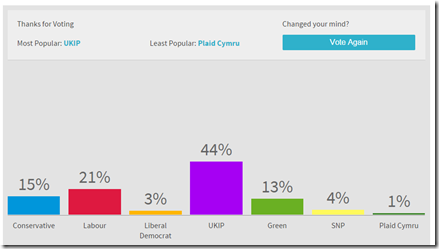 If I was the LibLabCon I would be a tad concerned.

Posted by The Filthy Engineer at 20:27 6 comments: