The new face of evil

This woman is going to drive millions into poverty just when we need to get  out of the hole we are in.

Of course she has a science background. No I thought not.

She was born and grew up in Wales,[3] and graduated in English literature at Queens' College,

And of course as I would expect she has no real idea of the real world. This is her CV.

In the mid 1990s, she worked for an environmental charity, and by 2000 had moved to work for Friends of the Earth as a climate change campaigner. She then worked for the Department for Environment, Food and Rural Affairs, implementing public awareness campaigns and helping draft the Climate Change Bill, before becoming head of government relations for the energy company, Scottish and Southern Energy. She left to form Sandbag in 2008.[5]

I find the next, truly disgusting. Our newly elected PM sucked up to this woman just to try and gain party dominance in elections.

But, then something changed, we then had a newly elected leader of the opposition. So David Cameron came in and wanted to reinvent the Conservative Party. And he decided to take an environmental theme. He changed the logo to a tree and he’d obviously listened to the focus groups. He’d realised that the environment was actually an issue for the electorate. So he was lobbied by the Friends of the Earth and he said, “Yeah, I’ll deliver you a Climate Change Act. If you vote me in I’ll give you the bill you want that will bring in this legal framework.” And that was hugely important, that Friends of the Earth campaign that enabled that got the opposition to take up this policy was really important.

I’ll now let you watch the video in peace. If you have the stomach to watch propaganda at work.

If you want to instead read the entire transcript, nip over to Bishop Hill

Email ThisBlogThis!Share to TwitterShare to FacebookShare to Pinterest
Labels: evil, friends of the earth

Beware of Greeks with Trojan Horses 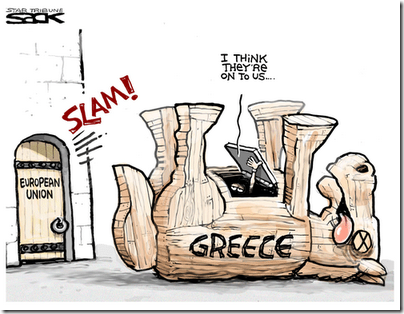 Posted by The Filthy Engineer at 13:33 3 comments:

Some excuses from kids that didn’t do their Homework

Note the spelling and Grammar.

Sorry Miss, I thort that I didn’t now that we had to wight sentinis as well.

I am reely sorry that I have no handed my home work in At the corect time and I should de more organased and more responnsadal for my own home work.

I will cope ever think think thick(My note: You got it right the first time) you rate on the bord sorry miss.

my orginiseing was atrotious. I am very sorry you had to waste time at breake. I will make sure this never happen again.

dear Miss XXXXXXXXxX I am sorry for not doing my homework just wrote the wrong date down it will never happen agian I just did not liston to ensusions (?) and did not write in properly

We wonder why we have so many jobless at the moment? These were all written by secondary school pupils.

I actually found it quite difficult to transpose those from the written word into this post.

Posted by The Filthy Engineer at 10:43 6 comments: