Not a truer word spoken in jest

This simple cartoon speaks for itself, in this countries, “minorities must be protected at all costs”. 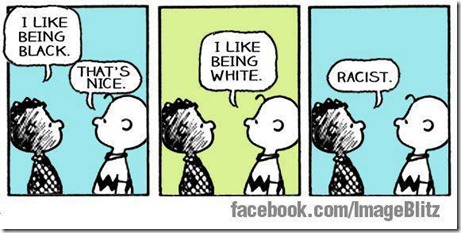 Now I’ve been around for a while now and remember when we had an influx of workers from the Caribbean in the fifties and sixties. Most people were slightly suspicious of these immigrants as they were not the same as the indigenous population. However much to our surprise those people of a different colour were soon to be seen as valued members of our society. Coming from poverty stricken islands they took up the slack of those jobs that the feckless in our society would disdain to do. (Yes we had feckless in those days).

Now It would seem that us white Anglo Saxons are no longer able to even mention a word of denigration against anyone of “Colour”. Though it seems to me that the latest generation, of the descendants of the first immigrants, with their jeans tops around their lower buttocks, and their base ball caps on sideways, will probably stab you if you “Diss” them. (Respect being earned seems to have escaped them).

Even a joke is frowned upon and is subject to a deep inrush of breath.

I found out amusingly how entrenched  the attitude to avoiding any mention of race has become.

The ship’s in port and a couple of Officers are being relieved.

At 1800 your host is sitting in the Officers bar on his favourite bar stool accompanied by his admiring fans. (If you can believe that, then more fool you. The admiring fans that is).

At 1805 the bar door opens and in walks the new System Engineer. And guess what? He’s of the black persuasion.

My immediate greeting was :

Oi you black bastard, this is a white man’s bar, get out.

You could have heard a molecule drop. White terrified faces all round.

However a reply from the oppressed slave was forthcoming.

Suck my dick, you honky bastard, it’s your round.

Of course the Slave black man had been a friend of many years and we were brought up in an era where political correctness was not out of control as it is now.

The state as I see it has stifled banter, encouraged professional hate crime, and doing it’s best to stifle free speech.

I also strongly believe that those minorities that are forever shouting out at how they are being abused, are slowly but surely alienating the general, decent, law abiding public.

We seem to have a society where individuals can’t stand up for themselves  and run crying to the courts, about every perceived slur on their character or life style.

But then again the Compensation culture has to be kept going.

Posted by The Filthy Engineer at 20:21 6 comments: