Nick Hogan case picked up by the MSM

They really are a bit slow. Do keep up. 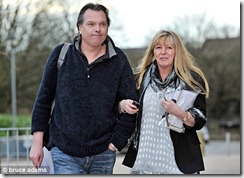 Freedom arrived earlier than expected for smoking ban martyr Nick Hogan yesterday... courtesy of a briefcase full of cash carried by a man in a green Guy Fawkes mask.

Former pub landlord Mr Hogan became the first person to be jailed in connection with the smoking ban when he was sentenced to six months for refusing to pay a fine imposed for flouting the legislation.

His plight inspired a campaign on the internet to raise funds to pay off his outstanding fines.

The arrival of the self-styled ' libertarian vigilante' at the Category B prison in his mask, full black costume and hat left other visitors amused or bewildered.

In the prison car park, Old Holborn, who wore his costume to hide his identity, flipped open the metal case to reveal enough bundles of used fivers and tenners to pay the £8,445.15 needed to secure 43-year-old Mr Hogan's release.

Posted by The Filthy Engineer at 14:13 2 comments: