A guy goes to the supermarket and notices an attractive woman waving at him.
She says "Hello!"

He's rather taken aback because he can't place where he knows her from. So he says, 'Do you know me?'
To which she replies, 'I think you're the father of one of my kids.'

Now his mind travels back to the only time he has ever been unfaithful to his wife and says, 'Are you the stripper
from the bachelor party that I had wild sex with on the pool table with all my buddies watching while your partner
whipped my butt with wet celery?'

She looks into his eyes and says calmly, "No, I'm your son's teacher!

Posted by The Filthy Engineer at 21:59 No comments:

Your favourite tipples from around the world. 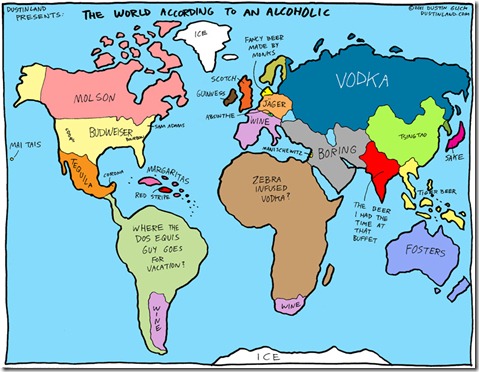 Posted by The Filthy Engineer at 20:05 5 comments:

Email ThisBlogThis!Share to TwitterShare to FacebookShare to Pinterest
Labels: drink

I listened to the whining yesterday from the public sector unions about how they were being subjected in the future to massive increases in their pension payments. Of course they wheeled on a poor downtrodden teacher who intimated that she would have to pay another £200 per month into her pension. Absolute rot.

I should know how much the cost would be, as actually I’m in  receipt of one of those civil service pensions. (I’m glad I got that out of the way, and I would appreciate it if you didn’t storm FE towers calling for my immediate burning at the stake).

This teacher must be on a very high salary, by my calculations about £90,000 if the 3% rise in contributions is implemented.

What strikes me about these muppets is that they have no idea how featherbedded they are. A maximum of a 43 hour week, 30 days holiday per year, (Ooodles more if you’re a teacher) and almost no possibility of the sack.  (I should know. It took me two years before I managed to get rid of a complete incompetent).

I’ve worked alongside civil servants in the Ministry of Defence and it was like living in parallel universes. They had a strict hours regime of 43 hours per week. Mine were in the region of 54 at the least, just to keep the ships I was looking after, functioning at the basic level. In fact when on-board said ships my weekly hours were regularly 70  or more.

What made matters worse, was the attitude of these servants of the crown. It was an attitude that had no recognition that they, by their laissez faire working, they might actually be prejudicing peoples lives.

A suckler on the teat of the crown.

*Note to self. Re-inforce the doors.

PS. I presume that when all these “public servants” go on strike, I’ll be able to claim back some of my council tax for services not rendered.

Posted by The Filthy Engineer at 16:04 5 comments:

Yesterday I sent this E mail to my council

This is the reply I received this morning.

Thank you for your email regarding data for your coursework.

I have forwarded your email to the Freedom of Information department, in order that they can respond to your enquiry.

For a start my name is not Luke and I’d like to know what course I’m supposed to be doing.