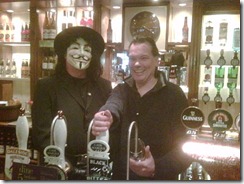 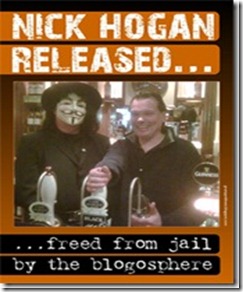 Thankyou to Old Holborn and Anna Raccoon for making it happen.

And also a hearty thanks to all of you who contributed to his release.

Posted by The Filthy Engineer at 18:38 No comments:

The Mathematics of Queuing

It is not certain when queues were invented, or by whom, but it is most likely to have been an Englishman of some description who originally laid down the foundations of this great art.

While on the surface a queue might just seem like a line of bored people, it is only when you delve deeper into the physics behind a queue that the true magic makes itself apparent.

The point of queuing varies with different countries, people and climates, although it is fair to say that the main point of a queue is to stand still for as long as possible without either:

It can be seen, with a little observation, that each individual has a different tolerance level to queuing. A rough estimate for how long, in minutes, someone is likely to wait in a queue without having an emotional breakdown can be expressed in terms of the following formula:

where T[sigh] is the time in minutes the subject will stand on his/her own at a bus-stop before sighing, Q[behind] is the number of people behind the subject in the queue, and Q[infront] is the number of people in front of the subject in the queue. I is known as the 'Interest Factor' and changes depending on the reason for the queue being there in the first place. For instance, the Interest Factor for something as interesting as the British Crown Jewels is 5.23; whereas for something like Hand Crafted Sheep Dung, it is 0.0057. The index value is that of a bus, which is set at 1.00.

There is, of course, another side to queuing, which has not yet been mentioned, and that is the art of 'Ritual Queuing'. It is a pastime practiced little outside England, but in the land of hope and glory it is something of a national institution with people 'above a certain age'. There is no real reason behind Ritual Queuing apart from the queuing itself. The optimum times for Ritual Queuing are weekdays from 10 am to 2 pm, where hordes of old ladies can be seen practicing the art at bus stops in every town and village in the land.

This is not the end of the story though. Whereas in England queuing is a sanctimonious pastime that should not be mocked or taken lightly, the Americans have adapted the art form, added a musical score and created Line dancing, which is the art of forming queues in time to music.

Posted by The Filthy Engineer at 11:30 No comments:

Email ThisBlogThis!Share to TwitterShare to FacebookShare to Pinterest
Labels: queue

It's national no smoking day. Hurrah. 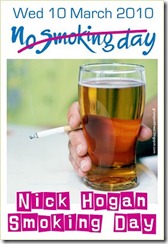 Just finished my tenth one. Bollocks to Deborah Arnott and ASH.

Posted by The Filthy Engineer at 10:28 No comments: