A very, very good article written by Lord Monkton of Brenchley, summarising the Climategate scandals. Well structured article with graphs to establish why the world is not warming as we have been led to believe.

This week, the world’s governing class – its classe politique – will meet in Copenhagen, Denmark, to discuss a treaty to inflict an unelected and tyrannical global government on us, with vast and unprecedented powers to control all once-free world markets and to tax and regulate the world’s wealthier nations for its own enrichment: in short, to bring freedom, democracy, and prosperity to an instant end worldwide, at the stroke of a pen, on the pretext of addressing what is now known to be the non-problem of manmade “global warming”.

It's a PDF file and can be found at this website:

By the way, I don't see much in the MSM, apart from advertising the Copenhagen conference. They really have been caught napping by the Blogosphere.
Posted by The Filthy Engineer at 20:42 No comments:

Lab Rats at the Altar of Climate Change 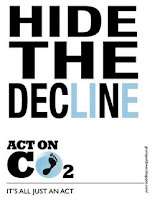 I've just been looking through the documents hacked from the CRU at the University of East Anglia and would like to draw your attention to this PDF. It's a policy document setting out how to change our behaviour in respect to the climate change debate. Here are some snippets from it.

The Rules of the Game

Climate change must be ‘front of mind’ before persuasion works
Currently, telling the public to take notice of climate change is
as successful as selling tampons to men. People don’t realise
(or remember) that climate change relates to them.

Use both peripheral and central processing
Attracting direct attention to an issue can change attitudes, but
peripheral messages can be just as effective: a tabloid snapshot
of Gwyneth Paltrow at a bus stop can help change attitudes to
public transport.

Use transmitters and social learning
People learn through social interaction, and some people are
better teachers and trendsetters than others. Targeting these
people will ensure that messages seem more trustworthy and are
transmitted more effectively.

And now they seek to enlist the help of Doctors

We need trusted organisations and individuals that the media can
call upon to explain the implications of climate change to the
UK public.

Now we scare the little girl to death with a bedtime story involving drowning bunnies.

Let's have some "smart" meters thrown in, so we can wallow in our shame at destroying the Planet.


Make climate change a ‘home’ not ‘away’ issue
Climate change is a global issue, but we will feel its impact at home –
and we can act on it at home.

Everyone must use a clear and consistent
explanation of climate change
The public knows that climate change is important, but is less clear
on exactly what it is and how it works.

You can find the article on this site. Fuckterra

It's down at the bottom and called New Rules, New Game

And if you want a complete breakdown of Climategate the fairy tale. Do read this, it's fascinating reading

Posted by The Filthy Engineer at 09:37 No comments: