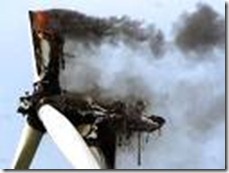 Remember our politicians touting that bird mincers wind turbines would enable a plentiful supply of green jobs. Well if you’ve got one, expect to have to find a new one shortly, well away from anything green.

Vestas Wind Systems, the largest manufacturer of wind turbines is now feeling the crunch in the real world of economics.

Last month, the company announced it would lay off 2,335 people and it has already slashed its 2012 earnings forecasts twice.

Then again if you were stupid enough to believe in this scam. Tough. I certainly won’t weep for those who have jumped onto the green gravy train, only to find the wheels have finally fallen off. We all have choices. Some of us see, that If it looks to good to be true, then you can bet your arse that you’re going to lose out. FE’s simple law of life.

Posted by The Filthy Engineer at 21:06 7 comments:

* Do the following exercise, guaranteed to raise an eyebrow.
* There's no trick or surprise.
* Just follow these instructions, and answer the questions one at a time and as quickly as you can!
* Again, as quickly as you can but don't advance until you've done each of them ... really. * Now, scroll down (but not too fast, you might miss something).

Multiply that number by 9

If the number is a 2-digit number, add the digits together
Now subtract 5

Determine which letter in the alphabet corresponds to the number you ended up with
(example: 1=a, 2=b, 3=c,etc.)

Think of a country that starts with that letter

Remember the last letter of the name of that country

Remember the last letter in the name of that animal

Are you thinking of a Kangaroo in Denmark eating an Orange?

I told you this was FREAKY!! If not, you're among the 2% of the population whose minds are different enough to think of something else. 98% of people will answer with kangaroos in Denmark when given this exercise.