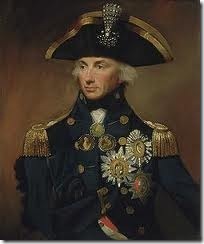 Nelson: "Hold on, this isn't what I dictated to Flags. What's the meaning of this?"

Nelson (reading aloud): „ England expects every person to do his or her duty, regardless of race, gender, sexual orientation, religious persuasion or disability.' - What gobbledygook is this for God's sake?"

Hardy: "Admiralty policy, I'm afraid, sir. We're an equal opportunities employer now. We had the devil's own job getting „ England " past the censors, lest it be considered racist."

Nelson: "Gadzooks, Hardy. Hand me my pipe and tobacco."

Nelson: "In that case, break open the rum ration. Let us splice the main brace to steel the men before battle."

Hardy: "The rum ration has been abolished, Admiral. Its part of the Government's policy on binge drinking."

Nelson: "Good heavens, Hardy. I suppose we'd better get on with it full speed ahead."

Hardy: "I think you'll find that there's a 4 knot speed limit in this stretch of water."

Nelson: "Damn it man! We are on the eve of the greatest sea battle in history. We must advance with all dispatch. Report from the crow's nest, please."

Hardy: "That won't be possible, sir."

Hardy: "Health and Safety have closed the crow's nest, sir. No harness; and they said that rope ladders don't meet regulations. They won't let anyone up there until proper scaffolding can be erected."

Nelson: "Then get me the ship's carpenter without delay, Hardy."

Hardy: "He's busy knocking up a wheelchair access to the foredeck Admiral."

Hardy: "Health and safety again, sir. We have to provide a barrier- free environment for the differently abled."

Nelson: "Differently abled? I've only one arm and one eye and I refuse even to hear mention of the word. I didn't rise to the rank of admiral by playing the disability card."

Hardy: "Actually, sir, you did. The Royal Navy is under- represented in the areas of visual impairment and limb deficiency."

Nelson: "Whatever next? Give me full sail. The salt spray beckons."

Hardy: "A couple of problems there too, sir. Health and safety won't let the crew up the rigging without hard hats. And they don't want anyone breathing in too much salt - haven't you seen the adverts?"

Nelson: "I've never heard such infamy. Break out the cannon and tell the men to stand by to engage the enemy."

Hardy: "The men are a bit worried about shooting at anyone, Admiral."

Nelson: "What? This is mutiny!"

Hardy: "It's not that, sir. It's just that they're afraid of being charged with murder if they actually kill anyone. There are a couple of legal-aid lawyers on board, watching everyone like hawks."

Nelson: "Then how are we to sink the Frenchies and the Spanish?"

Hardy: "No, sir. The French and the Spanish are our European partners now. According to the Common Fisheries Policy, we shouldn't even be in this stretch of water. We could get hit with a claim for compensation."

Nelson: "But you must hate a Frenchman as you hate the devil."

Hardy: "I wouldn't let the ship's diversity coordinator hear you saying that sir. You'll be up on disciplinary report."

Nelson: "You must consider every man an enemy, who speaks ill of your King."

Hardy: "Not any more, sir. We must be inclusive in this multicultural age.  Now put on your Kevlar vest; it's the rules. It could save your life"

Nelson: "Don't tell me - Health and Safety. Whatever happened to rum, sodomy and the lash?"

Hardy: As I explained, sir, rum is off the menu! And there's a ban on corporal punishment."

Nelson: "What about sodomy?"

Hardy: "I believe that is now legal, sir."

Editor’s note: Smoking is nearly banned on ships, drinking is limited, working at height regulations, border on the ridiculous. Rules of engagement don’t allow the commanding officer to make a timely decision. and a blind eye is turned on sodomy.

*Dedicated to Captain Haddock. With special thanks to David Wheeler who made this post possible*

Posted by The Filthy Engineer at 21:10 3 comments:

Email ThisBlogThis!Share to TwitterShare to FacebookShare to Pinterest
Labels: Nelson

Cleaning up the streets?

At least 100 officers surrounded Richard Jablonski's home after someone called police to say he had a gun.

Following the siege in January Mr Jablonski was arrested and charged with possessing an imitation firearm with intent to cause fear of violence.

I presume Mr Jablonski is an international terrorist, with an arsenal of machine guns, rocket launchers, and other sundry artillery.

Then again I would be wrong.

But the case against him was dropped after it was accepted the 38-year-old was actually holding a bottle of the household cleaning product during the incident. 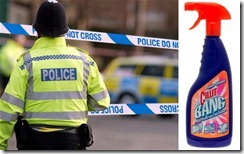 It took 100 Officers to ascertain that fact!

And you have to love some of the comments 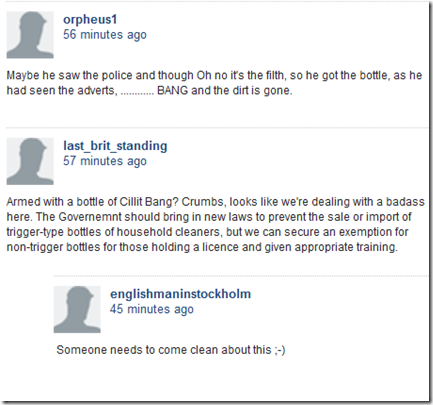 Posted by The Filthy Engineer at 12:42 4 comments: