I survived Munich. Just. Part one. 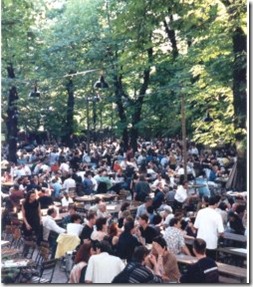 I arrived back in the UK in the early hours of this morning from a stag do for my future Son-in-Law.

The Terror started at 0530 on Saturday morning when I met up with 16 twenty year olds at Stansted Airport. A soon as we had cleared security the drinking began, which nearly resulted in many  missing the flight. Drinking continued on the flight even though it was only an hour and twenty minutes. (The author refrained from this stage of the drinkfest).

Getting in to Munich is easy due to the efficiency of the German public transport system and we were soon checked into the hotel.

Soon the cry went up from the sixteen “We must go and drink beer”, and soon the sixteen + two (My brother-in-law was the other “one”), headed up the road to the nearest and oldest beer garden in Munich.

Now as most of you will know the beer is served up in Steins. A Stein is approximately one litre of beer and is served in a large dimpled glass mug. After finding some suitable tables the order for eighteen Steins was placed. We didn’t have to wait long for the first waiter to deliver the first tranche. How he did it, gobsmacked us all. He delivered 12 Steins in one go. Six in one hand and six in the other. Being a puny sort of fellow, I have difficulty in picking up one Stein in both hands. Four rounds later we were thrown out due to some trangression, and we trudged off to catch a tram to another beer garden. The biggest in Munich. Bear in mind this only just two O’clock in the afternoon.

This was truly the Biergarden of all Biergardens. Hundreds of trestle tables set in the middle of open green land. What was so nice was the fact families spend their whole afternoon there with their packed lunches and just generally chill out. I’m not sure why when you are assailed by the sounds of a german oompah band and sixteen drunken Brits.

Part two features an obscene photograph, the oldest Bierhaus, pole dancing, and credit card fraud. Oh and the bill for the broken lift.

Posted by The Filthy Engineer at 21:02 2 comments: