Taking the cat to the vet

Yearly booster time for the furry killing machine that I call a cat. 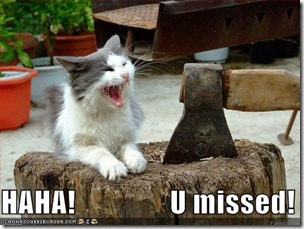 He’s now next to me on the sofa with his feet in the air snoring contentedly.

As much as I love him, sometimes I wish he was a goldfish.

Posted by The Filthy Engineer at 20:14 8 comments: 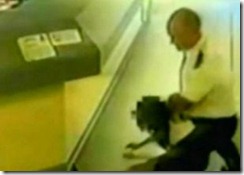 A police sergeant who injured a woman when he assaulted her in a cell was jailed for six months today.

Sgt Mark Andrews was caught on CCTV dragging Pamela Somerville, 59, across the floor of Melksham police station in Wiltshire before shoving her into the cell.

Ms Somerville was arrested in July 2008 after being found asleep in her car. She was detained for failing to provide a sample for a breath test.

The CCTV footage shows her lying on the floor for a minute before struggling to get up with blood pouring from a head wound.

Maybe we’ll have a few less stories about police thuggery in the future. Whilst the majority of police try and do the best they can, there is still a hard core, that think the law doesn’t apply to them.