We all love the European union.

The European Commission believes it is backed by a “silent majority” in favour of its push for further EU integration and potential future role as the economic government of Europe.

Posted by The Filthy Engineer at 20:09 No comments:

If Leg iron can do it so can I. 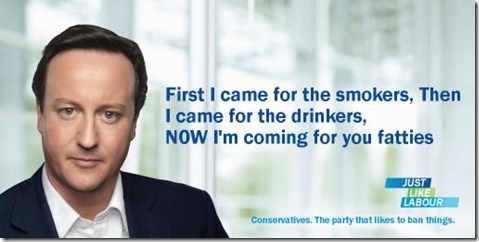 He really is the face of Nu labour the new conservative party. It’s not the way I want to be governed.

Look Dave. Stop pandering to the focus groups and special interests. There’s more important things such as saving our country from going down the financial drain.

I was well into a post fisking our glorious leader’s speech yesterday. However I inadvertently pressed the wrong key on my keyboard and the whole post disappeared into the ether except for one lonely “n”. (Don’t ask me which key. If I knew I’d remove it with an axe).

Instead I’ll give you this ridiculous article instead of being pissed off all day. That last sentence will give you a clue to what I’m about to write about. 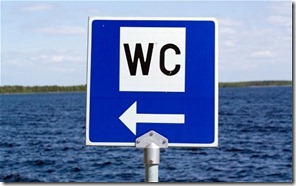 A sign that is used to point out where you can get relief when your bladder is bursting is the subject of hate by some.

Although the origins of the abbreviation “WC” are English, it has been adopted into everyday usage in German, Italian, Dutch, Hungarian and even French.

But now councillors in Gwynedd, north Wales, are being asked to justify the decision to include the term on roadsigns in the area.

The issue is due to be debated at the next meeting of the county council’s “language sub committee” following a complaint about the use of the non Welsh initials, short for water closet.

They really are mad. Or Batty

There was controversy recently over a £650,000 bridge being built over the same bypass to help bats cross the road.

Oh well, time for lunch. Oh and a pee.

Posted by The Filthy Engineer at 11:52 7 comments: