I’m doing my bit to save us from the drought.

However I’m contributing more CO2 to the atmosphere, (As if I care) by not having one of those new fangled condensing boilers (NFCB). Now my old fashioned boiler (Nearly new, due to getting it fitted before the diktat came in from the government, that you had to fit condensing crap), works by heating my water and storing it in an insulated tank. Works for me, as throughout the day I have hot water on tap. (Boiler on for one hour morning and early evening, with half hour top up at midday). (From what I’ve read and heard, most new installations do not have hot water cylinders. Why not?)

If you have a NFCB system that’s fitted now it’s akin to having one of those old fashioned Ascot boilers that just supplied hot water on demand. 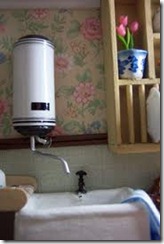 Remember them? From turning on the tap it took forever to get a decent temperature hot water.

Well the new condensing boilers as fitted to my son’s and eldest daughter’s houses are modern day clones.

To do the washing up just now in my abode it only took about a fifth of a gallon at the most  in order for me to have piping hot water entering my washing up bowl. (I do the washing up, her indoors knows her place and does the ironing)

At my son’s house it takes for ever and at least three gallons before just tepid water issues from the tap. Five minutes later if you need to refill the washing up bowl, you have to go through the whole rigmarole again, FFS.

Did TPTB envisage this when they decided to meddle in things they don’t understand, all in the name of preventing the utter twaddle of man made global warming?

No wonder we have a water shortage if we use at least fifteen times as much water before it is hot enough to usefully use.

Wankers. (In my time as an engineer they were known as “non technical terrorists”)

Posted by The Filthy Engineer at 20:18 4 comments:

1 - I'd kill for a Nobel Peace Prize.
2 - Borrow money from pessimists -- they don't expect it back.
3 - Half the people you know are below average.
4 - 99% of lawyers give the rest a bad name.
5 - 82.7% of all statistics are made up on the spot.
6 - A conscience is what hurts when all your other parts feel so good.
7 - A clear conscience is usually the sign of a bad memory.
8 - If you want the rainbow, you've got to put up with the rain.
9 - All those who believe in psycho kinesis, raise my hand.
10 - The early bird may get the worm, but the second mouse gets the cheese.
11 - I almost had a psychic girlfriend... But she left me before we met.
12 - OK, so what's the speed of dark?
13 - How do you tell when you're out of invisible ink?
14 - If everything seems to be going well, you have obviously overlooked something.
15 - Depression is merely anger without enthusiasm.
16 - When everything is coming your way, you're in the wrong lane.
17 - Ambition is a poor excuse for not having enough sense to be lazy.
18 - Hard work pays off in the future; laziness pays off now.
19 - I intend to live forever... So far, so good.
20 - If Barbie is so popular, why do you have to buy her friends?
21 - Eagles may soar, but weasels don't get sucked into jet engines.
22 - What happens if you get scared half to death twice?
23 - My mechanic told me, "I couldn't repair your brakes, so I made your horn louder."
24 - Why do psychics have to ask you for your name?
25 - If at first you don't succeed, destroy all evidence that you tried.
26 - A conclusion is the place where you got tired of thinking.
27 - Experience is something you don't get until just after you need it.
28 - The hardness of the butter is proportional to the softness of the bread.
29 - To steal ideas from one person is plagiarism; to steal from many is research.
30 - The problem with the gene pool is that there is no lifeguard.
31 - The sooner you fall behind, the more time you'll have to catch up.
32 - The colder the x-ray table, the more of your body is required to be on it.
33 - Everyone has a photographic memory; some just don't have film.
And an all time favorite-
34 - If your car could travel at the speed of light, would your headlights work?

Posted by The Filthy Engineer at 13:59 No comments: