CACC. Get off your arses you lazy buggers.

The CACC (Campaign against climate change, Honorary President, George Monbiot), really are a lazy bunch. If they have such a popular organisation, complete with editorial staff. Why do they only manage one post every two months?

They even have a forum where the last contribution was 4th December 2010. I have a feeling that they are not getting the support as their once hyped , “We’re all doomed “, scenario has become old hat to the general populace, as more and more people are questioning the science behind the scam.

Here is their latest attempt to garner support. I wonder how many will attend. Maybe I should bolster the numbers.

Confronting the Climate Emergency in an era of "austerity"

Join us in discussing ...

Form groups with others with similar interests / ideas within the campaign.... to convert ideas into real action.

Get involved, learn from others, bring your ideas... get active in the fight against the greatest threat to humanity we've ever seen...

Point 1. Bugger all, The country has no money>

Point 2. I suppose you’ve got that twat Huhne as an ally.

Point 3. I think that you’ll find that the average man in the street has more to worry about in the financial climate gripping the world.

Point 5. Build more nuclear power stations is the simple answer. A million climate jobs subsidised by the taxpayer is a drain on the economy that we can’t afford. Please read economy 101.

CACC. There you are. No need to travel and use up precious carbon getting there.

Email ThisBlogThis!Share to TwitterShare to FacebookShare to Pinterest
Labels: CACC

It must be a slow day at the Evening Standard.

CPS drops the case of assault by flying sausage 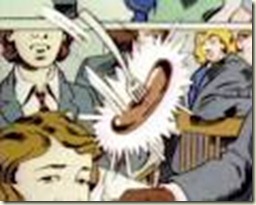 A bizarre case of assault by sausage has been dropped after a judge said that prosecuting could affect the dignity of his court and the prosecution process itself.

Religion of Peace. I think not

From the channel 4 dispatches programme aired last night. No wonder we home grow our own terrorists.

H/T to The Barking Spider who comments more prosaically than me on this video.

PS. If all the vids won’t play automatically, just click on the side arrows.