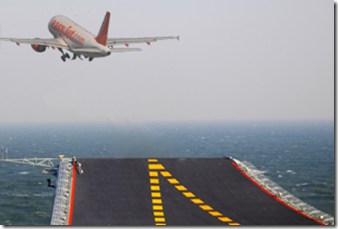 Britain’s airport capacity problem could finally be solved, if an experimental launch of an EasyJet airliner from HMS Prince of Wales proves a success.

Head of defence staff Nicholas Houghton insisted that commercial flights between aircraft carriers would allow runways to be moved if there were complaints, and save everyone the bother of having to drive to London.

“Aircraft carriers can adapt to changes in demand”, insisted Houghton. “You can sail one down to Gibraltar if anyone wants to visit there, or divert them to the Falklands if they fancy having a look at a penguin.”

The General pointed out that building ‘just a dozen or so’ new aircraft carriers would serve as a warning to rogue nations that armies of obnoxious tourists could be deployed anywhere in the world.

Using a modified launch ramp that can handle 300 passengers and up to 15 tonnes of duty-free, HMS Prince of Wales can now launch holiday makers with less than 40 seconds warning.

Houghton admitted that passengers would need to adapt slightly before they use the new facility.

“It’s a simple matter of taking the Queen’s shilling”, he explained. “We’re talking about less than 18 weeks basic training, learning how to hold your rum and then swimming a width wearing pyjamas”, he explained.

A spokesman from EasyJet pointed out that the mobility of aircraft carriers might occasionally mean a last-minute change in destination.

“If that happens we can arrange a transfer through our sister company, EasyPedalo”, said George Otway. “But at least you’ll have half a chance of arriving in the country you chose, which is a lot better than you’d get with Ryanair.”

Passengers on the first trial spoke of some difficulties, particularly as the location of their departure aircraft carrier was a closely guarded secret.

“We were flown out here on a rendition flight via Libya, and we’ve had nothing to do for 72 hours”, said one couple. “Our hand luggage has been stolen, there’s bullet holes in our suitcase and the scenery is just one depressing sea of grey. So overall, it’s about the same as flying out of Luton.”

Posted by The Filthy Engineer at 20:56 4 comments: