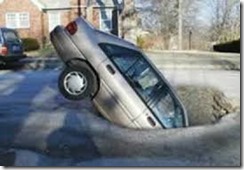 Since the summer (Don’t laugh), the roads in Kent have deteriorated to almost third world status. Everywhere you go there are whole (snigger) sections of road that have been shorn of the top surface. But that’s not the worst of it.

Potholes are becoming a dangerous menace. I think they’re actually breeding. Some are several centimetres deep. I certainly wouldn’t like to be a cyclist. The council say they are working on the problem but obviously not in my area.

Now that we have had a flurry of global warming, ie snow, the roads are even worse to drive on. The problem is that  snow filled potholes are like traversing a minefield without a mine detector.

I wonder how much Kent has spent of it’s road budget? I must ask.

Posted by The Filthy Engineer at 20:09 6 comments: