It doesn’t matter what TV programme you watch. or which paper you read, all you see is an overwhelming desire by the MSM for an apocalyptic disaster at the Fukushima nuclear plant.

Today the news was filled with comments like “A last ditch attempt” and “failed attempts at cooling”.

I’m sorry MSM, but couldn’t you for once support the unsung heroes that are trying to get the overheating cores and spent fuel rod pools from being a hazard.

These reactor workers, fireman, and the military are laying their lives on the line by the hour. And do stop wheeling out your, so called experts, to pedal your green anti nuclear ideology.

The reason that things are not going so well is the lack of electrical power to supply the pumps and allow for a sufficient quantity of coolant to reach the central cores.

FFS they’ve just suffered an horrendous earthquake and a tsunami to boot. It takes time.

As an engineer I would like to point out the following:

3. The pumps themselves will be powered by electric motors that will most likely have been immersed in salt water. They will have to be rinsed with fresh water and then dried till they have a resistance of at least one megohm. Difficult to do, without electric heating lamps.

The MSM and others complain that they are not receiving enough information. I would suspect, that those at the coal face are somewhat too busy to indulge in political spin. They need to be left alone to try and minimise the risk.

I lost count of the number of times in my career as an Engineer in the Royal Fleet Auxiliary, when we had a loss of all systems, and  on reaching the control room and finding the bridge talk back buzzing, the inane comment from the bridge  was “what’s  wrong and when will power be resumed?”

FFS did I have a crystal ball in my pocket, or a direct line to some deity. I’m afraid some profanity may have been uttered.

Please MSM. Leave the heroes of the hour to sort it out and stop speculate on something you seem to know nothing about.

Posted by The Filthy Engineer at 20:50 9 comments:

I.
Know that although the cat has the advantage of quickness and lack of concern for human life, you have the advantage of strength. Capitalize on that advantage by selecting the battlefield. Don't try to bathe him in an open area where he can force you to chase him. Pick a very small bathroom. If your bathroom is more than four feet square, I recommend that you get in the bath with the cat and close the sliding -glass doors as if you were about to take a shower. (A simple shower curtain will not do. A berserk cat can shred a three-ply rubber shower curtain quicker than a politician can shift positions.)

II.
Know that a cat has claws and will not hesitate to remove all the skin from your body. Your advantage here is that you are smart and know how to dress to protect yourself. I recommend canvas overalls tucked into high-top construction boots, a pair of steel-mesh gloves, an army helmet, a hockey face-mask, and a long-sleeved flak jacket.

III.
Use the element of surprise. Pick up your cat nonchalantly, as if to simply carry him to his supper dish. (Cats will not usually notice your strange attire. They have little or no interest in fashion as a rule.)

IV.
. Once you are inside the bathroom, speed is essential to survival. In a single liquid motion, shut the bathroom door, step into the bath enclosure, slide the glass door shut, dip the cat in the water and squirt him with shampoo. You have begun one of the wildest 45 seconds of your life.

V.
Cats have no handles. Add the fact that he now has soapy fur, and the problem is radically compounded. Do not expect to hold on to him for more than two or three seconds at a time. When you have him, however, you must remember to give him another squirt of shampoo and rub like crazy. He'll then spring free and fall back into the water, thereby rinsing himself off. (The national record for cats is three latherings, so don't expect too much.)

IV.
Next, the cat must be dried. Novice cat bathers always assume this part will be the most difficult, for humans generally are worn out at this point and the cat is just getting really determined. In fact, the drying is simple compared with what you have just been through. That's because by now the cat is semi-permanently affixed to your right leg. You simply pop the drain plug with your foot, reach for your towel and wait. (Occasionally, however, the cat will end up clinging to the top of your army helmet. If this happens, the best thing you can do is to shake him loose and to encourage him toward your leg.) After all the water is drained from the bath, it is a simple matter to just reach down and dry the cat. In a few days the cat will relax enough to be removed from your leg. He will usually have nothing to say for about three weeks and will spend a lot of time sitting with his back to you. He might even become psychoceramic and develop the fixed stare of a plaster figurine. You will be tempted to assume he is angry. This isn't usually the case. As a rule he is simply plotting ways to get through your defences and injure you for life the next time you decide to give him a bath. But at least now he smells a lot better

*No cats were harmed in the writing of this article. Just the owners*

Posted by The Filthy Engineer at 18:42 3 comments:

Don’t try this unless you are very brave. 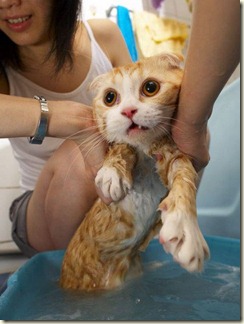 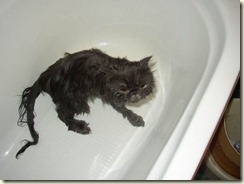 'You will pay, as God is my witness, you will pay.' 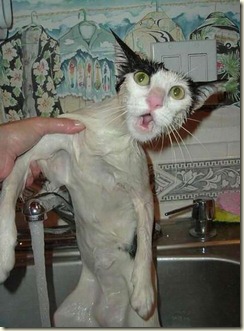 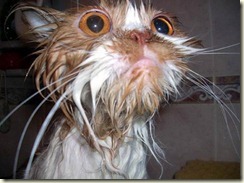 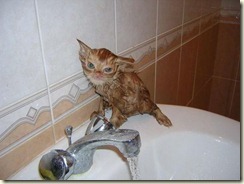 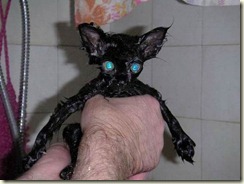 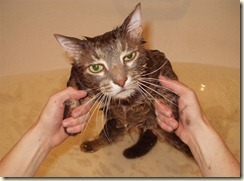 'No, I'm not your Good Little Kitty anymore.' 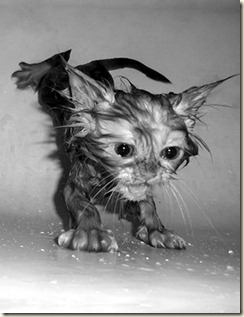 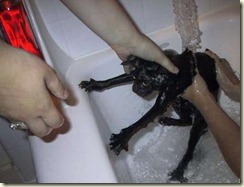 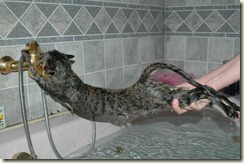 Posted by The Filthy Engineer at 16:34 3 comments: 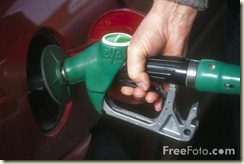 A single full tank of bio-ethanol uses up as much grain as an adult can eat in a whole year. In order to cover the German requirement for biofuel, an arable area of around one million hectares would be needed (Ed: That’s 3,861 square miles if you are British like me). That is four times the size of the south-western German state of Saarland, which would need to be fertilized, treated with pesticides and intensively farmed.

And of course we have no say in the matter. And of course another government quango sprang into life in order to bring this into being.

The Order imposes an obligation on fuel suppliers to ensure that, by 2010, renewable fuels make up 5% of their UK road fuel sales.

And why are we doing it? You’ve guessed.

The EU has set a target that by 2020 at least 10 per cent of transport fuel should come from biofuels.

Can we leave yet?

Posted by The Filthy Engineer at 14:33 4 comments: