Do Not Leave Unattended Luggage 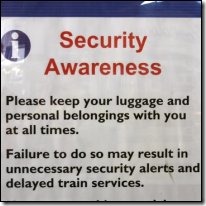 Imagine you're travelling via British Rail to reach some

You've left your suitcase/holdall/internal frame backpack in the luggage rack at the end of the carriage where you would imagine it to be safe – that is, until you hear an 'important announcement':

Please do not leave unattended luggage anywhere on the train. Any unattended items may be removed without warning.

Without too much thought, you head down to the end of the carriage to attend to your bag. It's still there, but it's not doing anything particularly interesting, and you begin to wonder what all the fuss is about. Then you realise what the message actually meant: you must not leave unattended luggage. As you're standing there, your bag is by no means unattended. You are fully free to leave it, and do so immediately.

On the way back to your seat, however, you notice that someone has left their bag entirely on its own. You must not leave unattended luggage, so you stand next to it awaiting the owner's return. Unfortunately, the train reaches your stop before anyone comes to claim it. You panic about leaving the bag, but recall that 'unattended items may be removed without warning'. It's clear that you have no choice, so you take it with you as you head to pick up your own luggage. Fortunately enough, the police come round your house a week later to reclaim the unattended bag. However, some great misunderstanding ensues and you end up having to explain the above to an unsympathetic jury.

If only they'd had an announcement telling the bag's owner not to leave their luggage unattended.

1 This does seem rather unlikely, but we did say 'imagine'.

Posted by The Filthy Engineer at 16:51 4 comments: