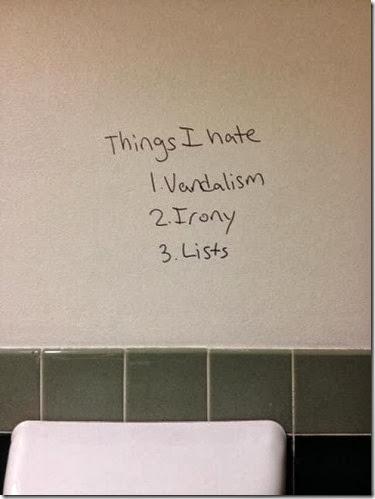 Posted by The Filthy Engineer at 20:46 2 comments:

Manchester schoolgirl expelled for not  wearing a Burqa.

Japan announces that they will no longer consume whale  meat as whales are now extinct, and the scientific research fleet are  unemployed.

UK Government has told the Japanese that Grey Squirrels  taste like
whale meat.

Britain now has ten Universities of Political  Correctness.
Professor Goldman of LSPC says there is still a long way to go  in the
fight to stop people saying what they think.

Britain's deficit  £10 trillion and rising. Government declares return
to surplus in 100years which is 300 years ahead of time.

France pleads for global help  after being taken over by Islamic
Countries.
No other country comes  forward.

Jose Manuel Rodrigez Bush says he will run for second term as  US
President in 2052.

Post Office raises price of stamps to £19 and  reduces mail delivery to Wednesdays only.

After a ten-year, £75.8  billion study commissioned by the Labour
Party, scientists prove diet and  exercise is the key to weight loss.
Average weight of a British male  drops to 18 stone.

Supreme Court rules punishment of criminals violates  their civil and
human rights. Victims to be held partly responsible for  crime.

New law requires that all nail clippers,  screwdrivers, fly swatters
and rolled-up newspapers must be registered by  January 2051 as lethal weapons.

Posted by The Filthy Engineer at 18:59 3 comments: