How not to catch one.

The remark by the child is priceless.

Posted by The Filthy Engineer at 18:19 3 comments:

I Want one of those

It would appear that the Russians have a  low tech version of the predator drone.

Police in central Russia are investigating a bizarre suspected assassination plot with a radio-controlled grenade launcher equipped with a webcam. 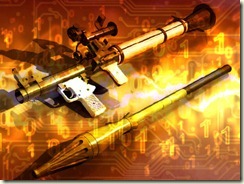 It’s even fitted with a self destruct mechanism.

The car, which had been hijacked earlier, also had two bottles with fuel inside. It is believed that the liquid would have been ignited by the firing of the grenade launcher and the evidence destroyed.