Oh look. It would seem that someone at the BBC has their finger in the pie of climate change.

The man responsible for looking after the fat pensions of the boys and girls at the BBC is a climate change fanatic, and he is part of an international group of investment managers who bust a gut to invest in 'climate change' schemes. He's called Peter Dunscombe, and he runs the £8.2bn corporation pension fund, advising trustees on a day-to-day basis about their investments. Mr Dunscombe, who addresses conferences about 'ethical investments', is also chairman of the Institutional Investment Group on Climate Change(IIGCC), which has 47 members and manages four trillion euros' worth of investments; yes, four trillion. Their goal is to find as many 'climate change' investment opportunities as possible:

I would really laugh my head of if the Beeb got burnt by this man's fanatism with climate change.

Then again I suspect the government would just allow the BBC to raise their license fee to cover it.

Email ThisBlogThis!Share to TwitterShare to FacebookShare to Pinterest
Labels: AGW

Are the Cornish a different race?

Having read over the weekend how the Cornish have failed in their attempt to have rude jokes about them stopped in law. I bring you this justification that they are no different to you or I. 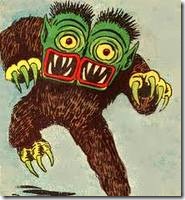 • According to some American academics, the Cornish are racially distinct because they are descended from two Celtic tribes, the Dumnonii and the Cornovil.

This is hogwash, of course. A young man born in 1975, say, is descended from two parents. Those parents were probably born about 1950 to two sets of parents, so our young man is descended from four grandparents. He has eight great-grandparents born around 1925, and 16 great-great-grandparents born in 1900. If you keep going at a rate of four generations per century, by the time you get back to the year 950 (shortly after King Athelstan decided that civilisation began at the Tamar) our young man has 4,398,046,511,104 ancestors, which is about eleven thousand times the population of the entire world at that time.
What this probably means is that we are all related and share a common ancestry, and to talk of any one group of people (the Corns) being descended exclusively from any other group of people (the Dumnonii and the Cornovil) is complete and utter rubbish. Mind you, it's a rather unsettling thought that I am therefore related to, say, Jade Goody. And don't tell me I shouldn't pick on her because she's dead. Most of my ancestors have been dead people. Many of them still are. What is this spurious sensitivity about dead people? Does being dead make you a better person?

Posted by The Filthy Engineer at 15:40 2 comments:

At it again. Smoking is now cast as an epidemic.

Although smoking rates are declining, the epidemic is far from solved

The Health secretary is at the forefront of a campaign to stop smoking in Britain completely.

Why is it that they want to stop a perfectly legal pastime for millions?

maybe it's the money it costs the NHS?

Nope it can't be that. From HMRC website, the tax take last year is £10.3 billion (Vat included). Now that is nearly 4 times as much as the cost to the NHS. If we eradicate smoking altogether it will mean that a typical family of 4 will have their tax go up by £500 per year. You anti-smokers are going to love that, aren't you?

SOURCE
Posted by The Filthy Engineer at 13:56 2 comments: