Those were the days when smoking was the norm.

Up to 70% of men smoked and a sizeable coterie of women did so also. Every home was littered with ashtrays, even those whose occupants didn’t partake of the pleasure. You only had to say “Do you mind if I smoke” and a plentiful supply of  ash trays would appear as if by magic. Even the bedroom was not out of bounds.

Then about twenty years ago the Nu puritans started to gain the ascendant. Slowly but surely they pushed the line that “Smoking kills”. Regardless of the fact that smokers knew the risks and accepted  as a fact of life, smokers might one day be struck down with lung cancer.

As the Nu puritans, showered with government money, became bolder, more and more diseases were added to the list of smoking related diseases. Cardiovascular, cancer of the Asoephegous (supply your own spelling if you’re a nosy nu puritan reading this post), gum disease, etc. Nothing was off limits to the nu puritans.

Slowly but surely the creep of prohibition set in. Bans on public transport, planes, etc. Then private offices were to have smoking rooms, etc. The evil of second-hand smoke

Of course the governments of the time, seeing their tax revenue falling, jumped on the band wagon of nu health, and vowed to save the nation by increasing tax on tobacco. This of course gave legitimacy  to the nu puritans, who have since redoubled their efforts to de-normalisation of the smoker.

So then they came for the pubs and clubs. The hysterical cry arose “We must save the bar people from dying of second hand smoke”, Of course they didn’t care that they would put thousands of staff out of work, many who smoked, and the rest, glad that they had employment. The government seemed to fail to understand that pubs are actually private premises. But then again when have you known an intelligent politician.

Of course the nu puritans have won the battles so far, but the hardcore  of us proud smokers will never give in. Unless the government bans tobacco completely (Do you think they will want to lose the £11.5 billion in tobacco revenue? If you do then find another planet to live on), then the nu puritans will have lost the war.

It’s a war of time and resolve. We can get through the display bans and plain packaging and though I may not see it in my life time we shall prevail.

You’re next fatties, drinkers, salt likers, etc ,etc,etc. The template is in place and now being used. 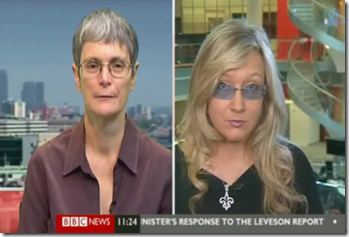 Can you guess which one is the nu puritan?

Is it the ASHen faced one on the left or the comely wench on the right?

(The clue is in the text)

Posted by The Filthy Engineer at 20:53 9 comments: