A few years ago. 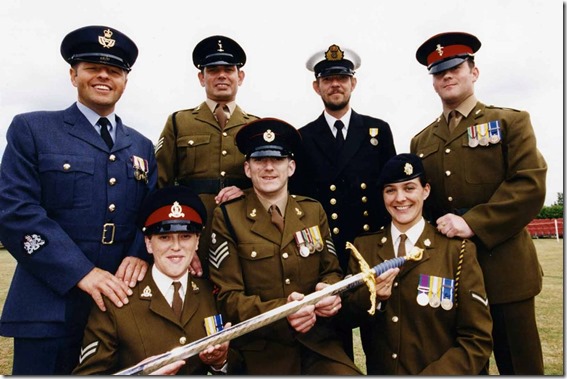 I’m the one in dark blue. We had just been awarded the Wilkinson Sword of Peace.

In 1995 RFA Sir Galahad shared the award of the Wilkinson Sword of Peace after providing assistance to the UK elements of the UN Stabilisation Force at Lobito, Angola, following years of civil war.  The ship was deployed on Operation Chantress as this deployment became known from the 6 April to the 21 August 1995.

It was a very interesting deployment. I was the liaison between the ship and the Royal Engineer detachment. I believe I’m the only engineer in my outfit to have carried out a controlled explosion of a land mine. (under supervision of course).

I found this pic by pure chance on the internet. Strange.

Posted by The Filthy Engineer at 20:22 4 comments: