Will Brown be kept locked up for the sake of the UK? 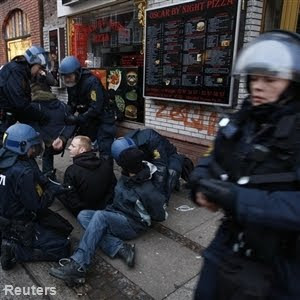 Talks in Copenhagen descended into chaos today as protestors locked down the conference and the president resigned, triggering dramatic scenes in the Danish capital.

Read the article and hope they don't let Gordon out.

FLASH NEWS: It's still bloody snowing here in Kent.
Posted by The Filthy Engineer at 16:01 No comments:

Are they going to kill us all at Copenhagen?

Is belief in global-warming science another example of the "madness of crowds"? That strange but powerful social phenomenon, first described by Charles Mackay in 1841, turns a widely shared prejudice into an irresistible "authority". Could it indeed represent the final triumph of irrationality? After all, how rational is it to pass laws banning one kind of light bulb (and insisting on their replacement by ones filled with poisonous mercury vapour) in order to "save electricity", while ploughing money into schemes to run cars on ... electricity? How rational is it to pay the Russians once for fossil fuels, and a second time for permission (via carbon credits) to burn them ? And how rational is it to suppose that the effects of increased CO2 in the atmosphere take between 200 and 1,000 years to be felt, but that solutions can take effect almost instantaneously?

Here is a couple of links that do try to explain the facts of Climate variability. They are quite long but well worth listening to.

The first is by Robert Felix, scientist and author. The second is by astrophysicist Dr.Willie Soon (Harvard-Smithsonian Center for Astrophysics), climatologists David Legates and Tim Ball and meteorologist Joe Daleo.

They are both radio Interviews.

Worth a listen to. Are we at the tipping point of a new ice age?

Posted by The Filthy Engineer at 15:06 No comments: 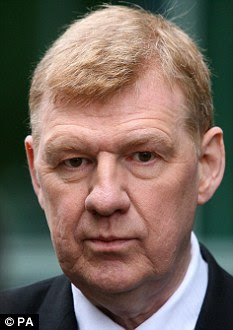 Sir Liam Donaldson has quit from his post as head of the NHS. About time too.

As a fully paid up member of the Labour Stasi, he has done as much as any Politician to make our lives more miserable.

They called on him to go two years ago after the introduction of a botched online application system for junior doctors, which led to hundreds of candidates not being interviewed for jobs.

More than 15,000 doctors failed to find posts and some were forced to seek work abroad.

Case 2: Attempting to have a minimum price for Alcohol introduced.

And earlier this year his relationship with the Government was strained after his plea for a minimum price on alcohol was rejected.

Case 3: The ban on smoking in Public places.

But he was praised for the introduction in 2007 of the smoking ban in pubs and restaurants.

Case 4: His hysteria over swine flue.

In recent months he has been in charge of swine flu preparations, in which millions have been spent on Tamiflu, vaccines and facemasks.

Those are only a few of the many. Remember CJD, Bird Flue, etc, and many more.

He is just one of the Killjoys in the society that we live, that should have been hounded out by the mob many years ago. Instead he is jumping ship before the election because he knows damned well that he will be out of a job then.

Wonder which Big Pharma company will be offering him a job?

Posted by The Filthy Engineer at 09:30 No comments: