I’m just glad that I don’t live in central London a rely on a car to go about my business. At least next year.

Unprecedented measures include road closures for official Olympic access only; pedestrianisation near sports venues and side streets shut for London 2012 operations.

Analysis also reveals that the Olympic-only lanes form only a fraction of the routes restricted for Games purposes.

It will be a wake-up call for commuters and business who are being urged by transport chiefs to plan now to avoid potential disruption.

The central zone forms part of the 109-mile Olympic Route Network which is designed to guarantee travel times between venues for athletes, media, officials and VIPs.

Personally I think the routes should only be for the athletes. The media, officials and so called VIP’s should practise a bit of time management like the rest of us will have to do.

79 banned turns along the ORN to speed up traffic.

256 parking bays affected - 120 suspended, 27 relocated and 109 with adjusted hours of operation outside the ORN (6am to midnight). 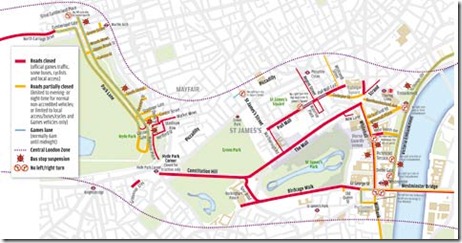 I wish Londoners luck next year.

Posted by The Filthy Engineer at 17:24 3 comments: