Much is being made in the MSM today about the complete balls up made by the private contactor’s lack of ability to recruit enough security personnel.

However that is not the purpose of this post. I’d just like to inform my reader about what I think is a more interesting security problem.

Every so often we are regaled with stories about locals not wishing to have missiles situated on their roofs. It’s these systems which in my mind could cause the most problems.

These sophisticated anti air weapons such as

Rapier is a British surface-to-air missile developed for the British Army and Royal Air Force. Entering service in 1971, it eventually replaced all other anti-aircraft weapons in Army service; guns for low-altitude targets, and the English Electric Thunderbird[1], used against longer-range and higher-altitude targets. As the expected air threat moved from medium-altitude strategic missions to low-altitude strikes, the fast reaction time and high manoeuvrability of the Rapier made it more formidable than either of these weapons, replacing most of them by 1977. It remains the UK's primary air-defence weapon after almost 35 years of service, and its deployment is expected to continue until 2020 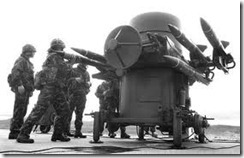 The missile, which travels at more than three times the speed of sound, uses a system of three dart-like projectiles, allowing multiple hits on the target. HVM can be fired from the shoulder, from a lightweight multiple launcher or from the Stormer armoured vehicle. 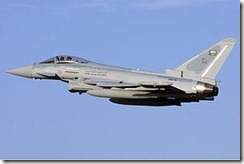 Eurofighter Typhoon is the worlds most advanced new generation multi-role/swing-role combat aircraft available on the market.

Wonderful bits of kit I’m sure, but what are they going to be used against and when? Now it’s pretty certain that the terrorists won’t have access to military aircraft, so this is the more likely scenario.

Well. If the chain of command is quickly traversed they could scramble a Typhoon or two from Northolt. However what do they do as the jumbo starts flying over the densely packed outer suburbs of London? By this time word will have been passed to the Rapier and Starstreak batteries that there is a jumbo jet acting suspiciously and to lock on and await further orders. But time is running out fast for a meaningful decision.

And there we are at the crux of the Dilemma. The decision to launch or not.

If you were the man at the top of the pyramid, would you be able to making the decision to shoot down a jumbo jet with a full load of passengers, over one of the most densely populated areas of the country?

Could you, the man with the finger on the trigger, pull that trigger knowing you would be likely to kill hundreds, if not thousands?

That’s why I consider them as window dressing to make the PTB look as if they are being tough.

Posted by The Filthy Engineer at 16:17 4 comments: