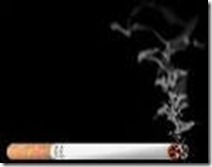 I will admit that I’m a lifelong smoker. Bearing in mind that I’ve been smoking for about 45 years and paid tax on my illegal perfectly lawful habit, why am I supposed to feel guilty about it.?

If for instance I average out the duty per pack of cigarettes at £2 per pack, then the extra tax I’ve paid, compared with an Anti smoker is: 2 x £2 x 360 x 45 = £64,800. And that is a very conservative estimate on the tax take. (I would hesitate to guess that it’s probably double).

What is worse is I suspect that my tax has probably gone on supporting the salaries of a couple of “smoking cessation advisors” or even worse, helped to fund the Quango ASH.(Spits).

Of course the Anti smokers will say that I’m a drain on the NHS. Well actually no. In my entire working career I’ve had precisely three days off due to the flue, my dental treatment is paid for by myself at no little cost, and I have private health insurance for myself and my family.

If as surmised that as a smoker I will die early, then of course I will be swelling the coffers of the state  by doing so. I won’t draw my pension for as long as the Righteous.

So to you Antismoker out there. Just look at what you’ve contributed. Misery for 25% of the population due your  incessant whining about how the whiff of cigarette smoke makes you feel sick, and the fatuous belief that SHS will kill you. It actually makes me sick with despair at how low this great country has fallen. Citizens fought for the right for minorities to peacefully co-exist. When the government comes after your favourite vice of choice, just remember this post.

Maybe in the interests of fairness you’d chuck £64,000 into the kitty just to even the score. After all I’ve been subsidising you for long enough.

Posted by The Filthy Engineer at 20:37 7 comments:

There’s a story doing the rounds today about how the MOD has “lost” £6.3 billion in assets. Let me tell you. They are unlikely to find them. The reason being that the twats in the civil service can’t even put a readily recognisable name to much of the stuff.

The humble round rubbery think that most of as would know as an ‘O’ ring for the sake of clarity is called ‘Ring Sealing Toroidal’.

A hose clip or “jubilee clip”, as it is usually known,  is “Clamp, hose, wormdrive”

An electrical plastic tie wrap thingy is given the grand name of ‘Strap line Supporting’.

You want a 16mm nut to fit a 16mm bolt? Then look at ‘Nut, Machine’. Mind you that is also the name for every other size of nut as well. May take you some time.

Ever tried your hand at plumbing in the MOD? Just try and find an ‘Olive’ for a compression fitting.(That is the normal description used by plumbers world wide). Found one yet? Me neither. I spent 43 years of my time looking and I still never found what the cretins called them.

Then there is the packaging. Everything received by the MOD is removed from the perfectly able manufacturers packaging and guess what? Repackaged.  Take one 13 amp household fuse. First it is wrapped in tissue. Next it is sealed into a plastic bag. After that there is a wrapping of oily green plastic. Place oily green packaging in corrugated cardboard and seal the whole caboodle in a cardboard box. Finally give it a silly name and a nine digit number. Oh and make sure you obliterate the manufacturers part number while you are about it.

I made the stupid mistake of ordering 200 of the above. I ended up with a mountain of packaging and a small mole hill of fuses.

Don’t get me started on the MOD transport system. I once ordered a complete Reverse Osmosis Plant to be fitted to a ship in refit in Falmouth. After waiting for delivery for days and trying to placate some very angry contractors I eventually tracked the equipment to Faslane nuclear submarine base. And it was only coming from the Depot in Plymouth.

Posted by The Filthy Engineer at 10:07 9 comments: