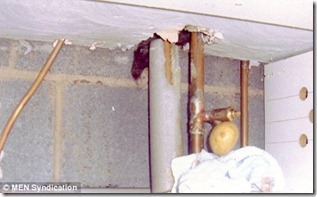 Now I'm an ex marine engineer and in my time I've had to resort to a few insane dodges in my time, However this one takes the biscuit potato.

A plumber British Gas Engineer called out out to fix a leak used a potato to correct the problem. (I've never done that, but I did jam the bum of a future Lloyd's surveyor into a sea filter box, to stop one of her Majesties ship's sinking in Antwerp harbour. But that's another story.)

Richard Pickles was amazed when the engineer, who had been at his property for two hours attempting to mend the leak, resorted to a potato to temporarily fix the problem.

Mr Pickles, who lives Lancaster with his wife Amanda and children, including a 10-week-old baby, said: 'The engineer said "I'm only supposed to be here for an hour" and rammed a potato on to stop the leak.

Have a good look at the picture above. The leak is on the drain for the system. The answer was:

I rang up the next day to tell British Gas what had happened and another gas fitter came. He sorted the problem in five minutes by turning a screw.

No doubt there was a small amount of scale preventing the valve from sealing positively. The answer is normally to back it off and then re-tighten it. Time taken: 20 seconds?

Why do they call these Numtpties, Engineers? In my day it took 4 1/2 years to gain that title.

daily fail
Posted by The Filthy Engineer at 20:16 4 comments:

There's even more of them fiddling their expenses. (Allegedly)

You couldn't make it up. Even those working in the parliamentary fees office were at it.

A top House of Commons official whose department was at the centre of the MPs expenses scandal has quit in disgrace after being arrested over fraud allegations.

Andrew Gibson, 49, who worked in the parliamentary Fees Office, was detained as a result of the long-running police investigation into MPs' expenses.

The Fees Office, and its role in agreeing MPs’ expense claims, was central to the controversy that engulfed the Commons last year.

Well I suppose he  saw how the troughers MP's could do it, and thought that he'd have a piece of it as well.

Inquiries by Scotland Yard revealed discrepancies in accounts handled by Gibson, a Resources Budget Officer who was well known to MPs as the man at the desk in the Fees Office who handled their expenses claims.

Full story here in the Mail

Posted by The Filthy Engineer at 19:45 No comments:

I wrote some while ago about my thoughts on how the RFA Wave Knight failed to prevent the capture of the Chandlers. It would seem that the pirates have lowered their sights and are now demanding a lesser ransom. Down from $7 million to $2 million. There are those now saying the ransom should be paid . Read it here.

No, No, No. That would just encourage anyone to think that hostage taking was a lucrative business.

I think that the majority of those writing in the comments agree with me on this one.

However it would never have happened in the first place if equipment in the vid below had been allowed to be used.

I've no idea whether this is real or not. It's a good read though. 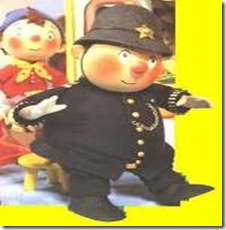 Having spent the past twenty minutes waiting for someone at Bodmin police station to pick up a telephone I have decided to abandon the idea and try e-mailing you instead. Perhaps you would be so kind as to pass this message on to your colleagues in Bodmin by means of smoke signal, carrier pigeon or Ouija board.

As I am writing this e-mail there are eleven failed medical experiments (I think you call them youths) in St Mary's Crescent, which is just off St Mary's Road in Bodmin.

Six of them seem happy enough to play a game which involves kicking a football against an iron gate with the force of a meteorite. This causes an earth shattering CLANG! which rings throughout the entire building. This game is now in its third week and as I am unsure how the scoring system works, I have no idea if it will end any time soon.

The remaining five failed-abortions are happily rummaging through several bags of rubbish and items of furniture that someone has so thoughtfully dumped beside the wheelie bins. One of them has found a saw and is setting about a discarded chair like a beaver on ecstasy pills.

I fear that it's only a matter of time before they turn their limited attention to the caravan gas bottle that is lying on its side between the two bins. If they could be relied on to only blow their own arms and legs off then I would happily leave them to it. I would even go so far as to lend them the matches. Unfortunately they are far more likely to blow up half the street with them and I've just finished decorating the kitchen.

What I suggest is this: after replying to this e-mail with worthless assurances that the matter is being looked into and will be dealt with, why not leave it until the one night of the year (probably bath night) when there are no mutants around then drive up the street in a Panda car before doing a three point turn and disappearing again. This will of course serve no other purpose than to remind us what policemen actually look like.

I trust that when I take a claw hammer to the skull of one of these throwbacks you'll do me the same courtesy of giving me a four month head start before coming to arrest me.

I remain your obedient servant

He received this reply:

I have read your e-mail and understand your frustration at the problems caused by youths playing in the area and the problems you have encountered in trying to contact the police.

As the Community Beat Officer for your street I would like to extend an offer of discussing the matter fully with you.

Should you wish to discuss the matter, please provide contact details (address / telephone number) and when may be suitable.

First of all I would like to thank you for the speedy response to my original e-mail. 16 hours and 38 minutes must be a personal record for Bodmin Police Station. Please rest assured that I will forward these details to Norris McWhirter for inclusion in his next Guinness book.

Secondly I was delighted to hear that our street has its own Community Beat Officer. May I be the first to congratulate you on your covert skills? In the five or so years I have lived in St Mary's Crescent , I have never seen you. Do you hide up a tree or have you gone deep undercover and infiltrated the gang itself? Are you the one with the acne and the moustache on his forehead or the one with a chin like a wash hand basin? It's surely only a matter of time before you are head-hunted by MI5 to look for Osama.

Whilst I realise that there may be far more serious crimes taking place in Bodmin, such as smoking in a public place or being Christian without due care and attention, is it too much to ask for a policeman to explain (using words of no more than two syllables at a time) to these twats that they might want to play their strange football game elsewhere.

The pitch on Fairpark Road, or the one at Priory Park, are both within spitting distance ... as is the bottom of the Par Dock, the latter being the preferred option especially if the tide is in.

Should you wish to discuss these matters further you should feel free to contact me on <???????>. If after 25 minutes I have still failed to answer, I'll buy you a large one in the Cat and Fiddle Pub.

P.S. If you think this is sarcasm, think yourself lucky that you don't work for the sewerage department with whom I am also in contact !!!