Now and Then (Part2) (Luddites are advised not to enter)

Ship’s Engine rooms past and present.

The only main propulsion was either steam powered or large diesel engines such as the one pictured below. A Doxford, opposed piston, trunk engine. Believe it or not, it was fitted with common fuel rail  injection. 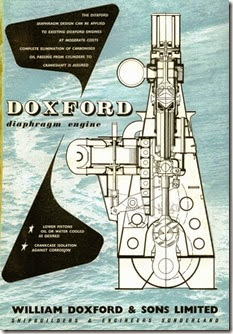 Control of main engines and auxiliary machinery were all local control, usually comprising of large levers and hand wheels.

The manufacture of potable water was by means of flash evaporators which had to be supplied with steam and operated with a vacuum.

My first ship’s steam boiler was a Cochrane upright, fire tube boiler. The automated control of the water level and lighting of the burner was a “Fireman” armed with a steel pole, with the end wrapped in diesel soaked rags, and a box of matches.

Temperature control of all machinery was purely manual and relied on the watchkeeping engineer reading local thermometers and adjusting cooler byepasses as required.

Health and safety. It was left to the individual whether he died or lived. It was up to you to look where you were going.

As an aside. Smoking. Allowed anywhere except on the deck of an oil tanker or in the hold of an ammunition carrying ship.

Electrical power is now supplied by high powered diesel generators which supply the main propulsion and other large items of machinery with megawatts of power at voltages of 3.3kV AC and above.

My last ship was fitted with Reverse osmosis plants to provide potable water. These rather taxed my brain in it’s dotage. I actually had to open two valves and press “Start” on the touchscreen. Then sneak off for a cup of tea elsewhere.

Control. (Not just temperature) Everything was controlled by a centralised computer system situated in the luxury of an air conditioned control room. If the ship needed to go forwards, a half brain dead deck officer, only had to push a small lever forward and the vessel would go in that direction.

Hours of work became more civilised with automated machinery spaces. The working hours became 8 – 5 for all except one duty engineer of the day, who is on call outwith the working hours. Alarm box in the cabin and a pager. The down side is that they clamped down on the bar hours.

The health and safety committee tells you are safe.

Smoking prohibited in most areas. Interestingly my last ship was an oil tanker and the only smoking area allowed was on a portion of the open deck bereft of lights at night.

If there are any marine engineers who disagree or agree with this article, please feel free to comment.

And anyone else. I’m an equal opportunities Blog.