“The other night I was invited out for a night with the 'girls.' I told FE that I would be home by midnight, 'I promise!' Well, the hours passed and the G & Ts went down way too easily.

Around 3 a.m., a bit loaded, I headed for home.
Just as I got in the door, the cuckoo clock in the hallway started up and cuckooed 3 times.
Quickly, realizing  FE would probably wake up, I cuckooed another 9 times.

I was really proud of myself for coming up with such a quick-witted solution, in order to escape a possible conflict with him. Even when totally smashed... 3 cuckoos plus 9 cuckoos totals = 12 Cuckoos (MIDNIGHT!)

The next morning FE asked me what time I got in, I told him 'MIDNIGHT'... he didn't seem pissed off in the least.
Whew, I got away with that one!

Then he said 'We need a new cuckoo clock.'

When I asked him why, he said, 'Well, last night our clock cuckooed three times, then said 'oh shit.' Cuckooed 4 more times, cleared its throat, cuckooed another three times, giggled, cuckooed twice more, and then tripped over the coffee table and farted.”

Posted by The Filthy Engineer at 19:54 6 comments:

Email ThisBlogThis!Share to TwitterShare to FacebookShare to Pinterest
Labels: cuckoo

Ups and Downs. The sequel

Here I posted the Ups and Downs my family has had in the year, so far. It hasn’t ended it would seem.

My bloody central heating boiler has packed up today!!

Posted by The Filthy Engineer at 18:50 6 comments:

A young Portsmouth woman was so depressed that she decided to end her life by throwing herself into the sea, but just before she could throw herself from the wharf, a handsome young man stopped her.
"You have so much to live for," said the man. "I'm a sailor, and we are off to Australia tomorrow. I can stow you away on my ship. I'll take care of you, bring you food every day, and keep you happy."

With nothing to lose, combined with the fact that she had always wanted to go to Australia , the woman accepted.
That night the sailor brought her aboard and hid her in a small but comfortable compartment in the hold. From then on, every night he would bring her three sandwiches, a bottle of red wine, and make love to her until dawn. Two weeks later she was discovered by the captain during a routine inspection.

"What are you doing here?" asked the captain.
"I have an arrangement with one of the sailors," she replied. "He brings me food and I get a free trip to Australia ."
"I see," the captain says.
Her conscience got the best of her and she added, "Plus, he's screwing me."

"He certainly is," replied the captain. "This is the Isle of Wight Ferry." 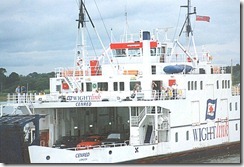 Posted by The Filthy Engineer at 10:02 2 comments: