The fight back begins

Calling all smokers, non smokers and everyone who wants to see The Tobacco control industry out of their lives. And hopefully out of their jobs. (Am I being too vindictive? I don’t think so.).

There’s a new web site started today to fight back at Tobacco control. Reproduced below is their press release. Do spread it around.

A grassroots response to an attack against smokers

The latest offensive by the Tobacco Control Industry against people who dare dissent from their ideology is a Wiki-style website published and run by paid professionals. In it, they attempt to portray ordinary but active people who enjoy tobacco and promote Free Choice as arms of the tobacco companies and as if they were generally getting paid to support the Tobacco Industry. In response to this offensive, a similar but opposing Wiki website is being launched on June 28th.

An ongoing project, the website, Tobacco Control Tactics, (TCT or tctactics.org) is a compilation of years of research conducted by unfunded grassroots members of organizations around the world who are alarmed by the under-reported and unaccounted for harm the international Tobacco Control Industry is causing to ordinary citizens and economies.

"It is high time the public is made aware of what is going on in the Tobacco Control Industry and we believe TC Tactics will be a very positive step in that direction," says Wiel Maessen of the Netherlands, a founding member of TICAP (The International Coalition Against Prohibition) who was one of the prime initiators and motivational forces behind the creation of the TCT Wiki.

The website explains how Tobacco Control has morphed from a reasonable movement to educate consumers about the health effects of using tobacco while working to reduce youth tobacco use. It is now a well-funded and highly organized industry encouraging discrimination against adult consumers of tobacco. TCT explores how scientists, afraid to jeopardize their careers, publicly dissent from the central doctrines of the Tobacco Control Industry only after they retire, and how the Pharmaceutical Industry both influences the research done on tobacco issues and funds front groups to promote conditions favorable to sales of ineffective nicotine replacement therapy products. In brief, it examines, as its name states, the tactics used by the powerful, international and highly integrated Tobacco Control Industry, an industry which is far less recognized but arguably as powerful as the Tobacco Industry itself.

When asked to describe what the TCT project was all about, Michael J. McFadden of the US-based Citizens Freedom Alliance said, "Considering the unremittingly positive media imaging of antismoking organizations we expect people to be shocked by what they read in these Wiki pages. We ask readers to simply read our pages carefully and compare them with information presented on the other side of the issue. We believe people will be angry at the way trusted officials and institutions have used the same sort of manipulative and cold-blooded tactics long associated with the Tobacco Industry in order to push a hidden agenda of denormalization and eradication rather than an open program of simple education and proper control."

The creators of Tobacco Control Tactics believe that today’s Tobacco Control Industry may very well be doing far more harm to people and society than is generally recognized. Whether that recognition can be raised to the level of public consciousness needed to bring about change remains to be seen. Bill Gibson, a Scottish Director of FORCES International asks, “Can a loosely knit and unfunded group of consumers sharing enjoyment of a legal product and those supporting them stand up successfully against a highly organized, tax- and pharmaceutical-wealthy international industry?” And then answers, “We believe that the TCT website is a good step in that direction: Truth, communication, and information can stand up and win against ‘Big Money’ when offered the sort of level playing field provided by the internet.”

The Tobacco Control Tactics website can be found HERE.

Posted by The Filthy Engineer at 15:14 No comments:

I think the weather station below is probably as accurate as the UK Met Office. 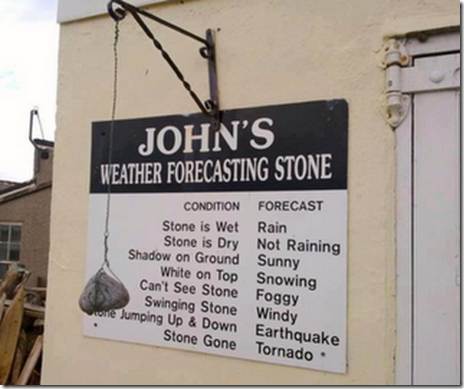 Posted by The Filthy Engineer at 09:47 5 comments: