When the leaflet drops onto your mat. make sure you read it.

This is an official Government warning on behalf of the Green party and the University of  East Anglia. 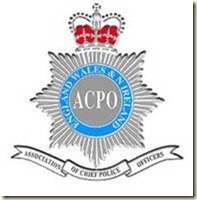 I’ve just been reading an article in the Guardian(Shock, Horror) about that shadowy body called ACPO. For those that don’t know, this stands for Association Of Chief Police Officers.

Now most people would think that it would be a good thing for all those nice Senior Police Officers, to get together to discuss strategy in the war against crime.

But what do you know about them? I suspect not very much.

Acpo was once a liaison group. But, like all bureaucracies, it has grown. It now runs its own police forces under a police chief boss, Sir Hugh Orde, like a British FBI.

It is self financing. It trades on its own account, generating revenue by selling data from the police national computer for £70 an item (cost of retrieval, 60p).

It owns an estate of 80 flats in central London.

Operating a separate private firm offering training to speed-camera operators, which is run by a senior officer who was banned from driving.

Having just assisted my daughter to buy a flat in London, I know that they’re not cheap. My estimate of that “little investment” in monetary terms is a value of at least £20,000,000. That’s my lowest estimate. Other sources indicate the figure could be as high as £32,000,000.

What do they need all that money for?

As a private company, Acpo need not accede to Freedom of Information requests (Section 32 of the FOIA. Law Enforcement) and presumably could distribute its profit to its own board.

Maybe that’s the answer to my question about Fact two. But then one of their basic principles stated in their own code of ethics reads.

Holders of public office should take decisions solely in terms of the public interest. They should not do so in order to gain financial or other material benefits for themselves, their family, or their friends.

Should we not be a tad scared that a few senior Police Officers wield so much power with so little accountability?

Why does this body need to make so much money if it is only a discussion group of CPOs?

Why is it allowed to sell data from the Police national computer?

The article where I sourced this material can be read in the Guardian . The article is about Mark Stone, the Police Infiltrator that went native.

*Puts tinfoil hat back in cupboard*

Posted by The Filthy Engineer at 12:22 2 comments: