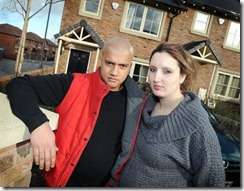 People living in a multi-million pound ‘homes of the future’ project in Bradford are up in arms over the sky-high electricity bills they have racked up.

I have no sympathy for people who are enticed into buying over hyped homes like this. These are usually the technically illiterate who don’t bother themselves to look into the running costs of the relatively new and unproven  green technology.

The remainder were constructed to a slightly lower energy efficiency level, but were also equipped with air heat pumps, solar panels and rainwater harvesters.

As an engineer the moment I hear the word “pump” I can just see kWh’s spinning before my eyes. Pumps use a large amount of energy in pushing fluids around, especially if  it has to go uphill. Ie, to upper floors.

It looks like these folks have bought a complete pigs ear of a property. Mind you I’m suspicious to say the least when they say the following:

Raquel and Sunny Tanday, both 23, and the parents of two young children, say their power bills come to about £500 a quarter since December 2011.

Maybe they are being misquoted by the paper, because a summer month quarter will use less energy than a winter quarter. (Unless they have air conditioning for the summer months, which would explain the high usage).

I live in a three story house built in 1903. I have sash windows (Although 2/3 have been replaced with double glazed units), no cavity walls, and a non condensing boiler. I do have modern heating controls, that time the on and off of the heating for various times of day, and a modern room thermostat. I also have radiator thermostats that I can turn down for rooms that are not in use.

There is something seriously wrong with the cost they are paying. I pay about £1,400 for the whole year. Of course I have set my thermostat to 20 deg C and timed the system to come on only when needed. I’d like to know what these residents had set their systems for.

But this next piece from the council is interesting.

“We are confident that when these problems have been resolved, residents at Pavilion Gardens will benefit from lower bills in the future. We want to reassure residents that they will be reimbursed for any usage above the standard charge for their household.”

But earlier in the article their energy supplier had stated  that the standard charge , based on a national average is, (Wait for it) £1261.

They’ve bought a so called,  energy efficient home, and are paying almost £750 a year more than the standard tariff.

(If I was the council I’d be sending in the drug squad to ascertain if this was a cannabis growing operation).

And of course the council will attempt to get of the hook.

The Council stressed that it will charge the original building contractor for any costs incurred in reimbursing residents.

Good luck with that West Bowling.

These stories make you want to smoke, drink, eat, and generally abuse your body.

Posted by The Filthy Engineer at 21:20 8 comments:

I was so depressed last night thinking about the economy, the wars, lost jobs, savings, Old Age Security, retirement funds, etc .... I called a Suicide Hotline.

I had to press 3 for English.

I was connected to a call centre in Pakistan. I told them I was suicidal.

They got excited and asked if I could drive a truck......

Posted by The Filthy Engineer at 11:43 No comments:

Good. Maybe he’ll be kicked out as an MP.

Posted by The Filthy Engineer at 10:31 6 comments: