Ban them, Ban them.

What’s the difference between a samurai sword and a blind person’s white stick?

One’s curved and shiny and the other is straight and white.

A police force has apologised to a blind grandfather who was shot in the back with a 50,000-volt Taser stun gun after officers mistook his white stick for a samurai sword.

Two-time stroke-victim Colin Farmer, 61, said he thought he was being attacked by muggers when he was hit with the weapon by the officer, who then handcuffed the retired company director as he fell to the ground.

I think a change in the law is in order here.

The Officers in charge at this incident be given white sticks, and Mr Farmer to be given a shiny samurai sword to protect him from those idiots.

I can see it in my future where I’m gunned down for trudging back from my local shop carrying a lime, to go in a gin and tonic, and being reported to the plod for having a grenade.

The idiocy of the Lancs police is unbelievable. How many samurai sword owners walk down the street tip tapping their swords along the curb?

Another point is at what time was he a threat to them? They tasered him from behind. Were they expecting some lightening Kung Fu manoeuvre? 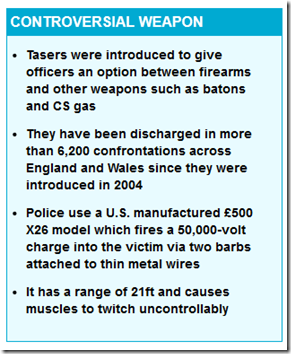 What really worries me is that more and more of our  plod want to be issued with fire arms. If they can’t be trusted to with a taser, then God help us if they are given weapons that are designed to kill.

I think they need to be reminded of Peelian principle numbers six and seven.

Police use physical force to the extent necessary to secure observance of the law or to restore order only when the exercise of persuasion, advice, and warning is found to be insufficient.

Police, at all times, should maintain a relationship with the public that gives reality to the historic tradition that the police are the public and the public are the police; the police being only members of the public who are paid to give full-time attention to duties which are incumbent upon every citizen in the interests of community welfare and existence.

One of my remedies is that every police officer should be tasered every month to provide community cohesion.

And to reinforce it for the lower ranks, chief constables to be shot with firearms every quarter. That would cut down the police wage bill.

Good night all. Have a crime free evening.

Email ThisBlogThis!Share to TwitterShare to FacebookShare to Pinterest
Labels: taser