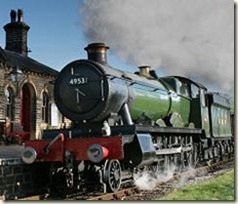 A commuter train from Charing Cross slid for a record two-and-a-half miles because of leaves on the line.

And that’s my line. You can see why I avoid trains like the plague.

Posted by The Filthy Engineer at 16:48 2 comments:

Remember the case of the custody Sargent who was convicted of actual bodily harm after throwing a 59 year old woman to the floor of a cell?

The officer was found guilty of causing her actual bodily harm and jailed for six months in September.

Sgt Andrews spent six days in prison, but was released on bail pending the appeal at Oxford Crown Court.

Mark Andrews spent six days in jail after being convicted

A Wiltshire policeman convicted of assaulting a woman in custody has been cleared on appeal.

The appeal judge, Mr Justice Bean, said after the four-day hearing he was satisfied that Sgt Andrews did not intend to throw Ms Somerville into the cell and that injuries she suffered were probably caused by the door frame.

Email ThisBlogThis!Share to TwitterShare to FacebookShare to Pinterest
Labels: justice

NEW YORK (Reuters Health) - A new study adds to the previously reported evidence that cigarette smoking protects against Parkinson's disease. Specifically, the new research shows a temporal relationship between smoking and reduced risk of Parkinson's disease. That is, the protective effect wanes after smokers quit.

"It is not our intent to promote smoking as a protective measure against Parkinson's disease," Evan L. Thacker from Harvard School of Public Health emphasized in comments to Reuters Health. "Obviously smoking has a multitude of negative consequences. Rather, we did this study to try to encourage other scientists...to consider the possibility that neuroprotective chemicals may be present in tobacco leaves."

As reported in the March 6th issue of Neurology, Thacker and colleagues analyzed data, including detailed lifetime smoking histories, from 79,977 women and 63,348 men participating in the Cancer Prevention Study II Nutrition Cohort. During about 9 years of follow-up, 413 subjects developed definite or probable Parkinson's disease.

"The results were similar for men and women, and were also similar to the results of studies by many other researchers looking at the same topic," Thacker noted.

In former smokers, more years of smoking, fewer years since quitting, more cigarettes per day, and a higher total amount of lifetime smoking were all related to a lower Parkinson's disease risk. The researchers also found that the duration of smoking and the time since quitting influenced risk more than the average daily amount of smoking.

"The results of our study," Thacker said, "can probably be explained by something in cigarettes -- most likely in the tobacco itself -- actually protecting people against getting Parkinson's disease. That would be the simplest explanation that makes the most sense."

Studies to determine if, in fact, there are neuroprotective compounds in tobacco are warranted, the researchers say. "The observation that smokeless tobacco users also have a lower risk of Parkinson's disease suggests that the most likely candidates are not compounds generated by combustion, but rather constituents of the tobacco leaves."

Posted by The Filthy Engineer at 10:41 3 comments: